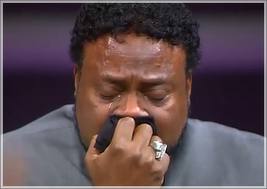 Below is a link to my most censored blog in a while. BISHOP EDDIE LONG PERSECUTED BY NEW WORLD ORDER MEDIA! I published it in September of 2010, right after Bishop Long's accusers exposed the lawsuits they had filed against the pastor of one of Atlanta's largest churches. At the time, New Birth Missionary Baptist Church had roughly 25,000 members. I asked Bishop Long why mainstream media exploits lawsuits against him but hides numerous lawsuits defrauded clients file against The (Johnnie) Cochran Firm - See the article in FreeSpeakblog at this link http://freespeakblog.blogspot.com/2012/09/bishop-eddie-long-persecuted-by-new.html - I picketed hypocritical media companies gathered at New Birth Church as they hounded Bishop Long right after the story about lawsuits against him aired. I told Bishop Long that reporters would leave if he asked them about racists' secret weapon against blacks. Reporters would not stick a mike in his face ever again if he said four little words: THE COCHRAN FIRM FRAUD. It will work for anyone who is exposed in the media for real or perceived wrongdoing. Try it. Don't say, "I didn't do it" or "No comment." If the press hounds you for a statement, just say, "The Cochran Firm Fraud!" and they will exit fast.
MANY PEOPLE SAY BISHOP LONG IS BACK ON TOP.
SEE HIS EXCITING NEW VIDEO EMBEDDED BELOW.
WHY does the media exploit controversy surrounding every African American and company that has African Americans at the helm, but you cannot get any mainstream news company to report the many lawsuits against The Cochran Firm?

WHY do consumer protection agencies REFUSE to take complaints against The Cochran Firm from its defrauded clients? The Atlanta BBB refused to accept my consumer complaint against The Cochran Firm on Peachtree Street in Atlanta. The law firm went to Georgia Superior Court and declared that it has no offices at all in the State of Georgia, and the judge dismissed the Neals' lawsuit against The Cochran Firm based on that perjury! Why won't media companies give that report?  Do they want to preserve The Cochran Firm's misuse of Johnnie Cochran's name in order to DEFRAUD MORE AFRICAN AMERICANS?
DID YOU KNOW REV. PINKNEY, AN NAACP CHAPTER PRESIDENT, ASKED NAACP MEMBERS NATIONWIDE TO JOIN HIS RADIO AUDIENCE ON SUNDAY, MARCH 4, AND BURN THEIR NAACP MEMBERSHIP CARDS?
IF NOT, WHY NOT? ISN'T THAT NEWS?
JOIN Rev. Pinkney, first minister jailed because quoting the Bible was called a terrorist threat; Ralph Poynter, co-host, former NY school teacher, union organizer, husband of famed activist lawyer Lynne Stewart, who was disbarred and is presently jailed in Texas for zealously defending unpopular clients; and Mary Neal, director of Assistance to the Incarcerated Mentally Ill (AIMI), exposing The Cochran Firm Fraud and other injustices like mass incarceration, criminalizing mental illness, wrongful arrests, executions - ALL for the love of money; Libby, who discusses the Benton Harbor, Michigan's takeover by a major corporation. We discuss HYPOCRISY and REMEDIES each Sunday on the Rev. Pinkney Blogtalk Radio Show at 5PM EST. Taped shows are available online at http://t.co/UNpfYWY . The call-in number is (347)994-3644.  Do not miss the March 4, 2012 show, when Rev. Pinkney says he will EXPOSE why Rev.Martin Luther King refused to be an NAACP member!
WHY DO MAINSTREAM MEDIA COMPANIES PROTECT THE NAACP AND THE COCHRAN FIRM FROM NEGATIVE PRESS BUT HAVE A MEDIA BLITZ WHEN OTHER AFRICAN AMERICANS HAVE PROBLEMS? COULD IT BE THAT THE NAACP AND THE COCHRAN FIRM ARE NOT REALLY OPERATING IN AFRICAN AMERICANS' BEST INTEREST?
WHY can The Cochran Firm perjure itself in courts of law without censure?
If you read scandals about Bishop Long, Michael Vick, Jessie Jackson, Bill Cosby, Mike Tyson, Michael Jackson, and Tiger Woods, why does the same media hide negative news about the NAACP and The Cochran Firm? Can you imagine a possible reason?
WHY did the media not report that The Atlanta office of The Cochran Firm declared itself "nonexistent" in Georgia Superior Court and in United States District Court?
WHY is/was The Cochran Firm registered among Tennessee Secretary of State's list of companies as "ASSUMED NAME"?
WHY is The Cochran Firm sent to diffuse tensions in the African American community whenever police kill people?
SIMPLE EXPLANATION COULD BE THE (JOHNNIE) COCHRAN FIRM IS COINTELPRO, COINTELPRO, COINTELPRO!  Ask the managing partner of Atlanta's Cochran Firm office, Hezekiah Sistrunk what is going on? I did at this link  http://marylovesjustice.blogspot.com/2012/03/open-letter-to-hezekiah-sistrunk-esq.html  See "Open Letter to Hezekiah Sistrunk, Esq. from Mary Neal"
Do you follow The Cochran Firm cases years after police violence to see if the families actually receive damages for wrongful deaths and brutality? They often DO NOT. I report that, so I am stalked, censored, and persecuted, but police say if I tell, they will Taser and arrest me?
Poll Question
DO YOU THINK IT IS FAIR IF THE GOVERNMENT USES LAW FIRMS AS CoIntelPro IN MINORITY COMMUNITIES TO COLLECT INFORMATION AND REDUCE OR ELIMINATE PAYOUTS AFTER POLICE BRUTALITY AND CORPORATE WRONGDOING?
ENQUIRING MINDS WANT TO KNOW. GOOGLE "COCHRAN FIRM FRAUD."

You heard Johnnie Cochran's famous slogan, "If the glove doesn't fit, you must equit."
The Cochran Firm's New Slogan by Whites Who Bought Johnnie Cochran's Firm and Misuse His Name:
"IF YOU HAVE NO DEFENSE, JUST SAY YOU DON'T EXIST!"

A controversial ceremony for Bishop Long  http://youtu.be/AVkoQHCXSK8
"We're in a different season."
Posted by MaryLovesJustice Neal at 10:24 AM