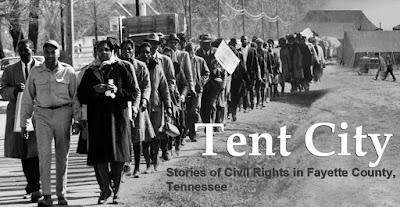 Elitists who think they can control Mary Neal via ‪terrorism remind me of a song we sang as children in Fayette County, Tennessee, where the very first lawsuit under the Civil Rights Act was filed:
When I die, bury me deep
Put a bowl of molasses at my feet
Put two biscuits in my hand
So I can sop those molasses in the Promised Land!

"She whom the Lord sets free is FREE INDEED." You have met a free woman. Amen. I was born free and inspired by revolutionaries of the civil rights movement who were my teachers, church members, and parents of children with whom I played. Defending one's RIGHTS is not just something I read about in books and saw on television. Research "Tent City" in Fayette County. Not even financial oppression makes true revolutionaries back down. Standing for human rights under pressure is as much a part of my character as white supremacy is for some of you.

I learned as a child that revolutionaries are not necessarily people who were educated in the finest universities, celebrated by huge crowds, or who dine with kings. The revolutionaries in my small town were mostly uneducated tenant farmers who refused to accept the denial of their basic human rights. Instead, they united to change conditions they found intolerable. A few owned their own farms, but most were sharecroppers. They did not employ violence. Rather, my neighbors united in prayer and action to triumph over the evil that was, and still is, a concentration of power in the hands of oppressors. Oppression today has not changed except in its scope. Increasingly, working class whites are treated with contempt that was historically reserved for ethnic peoples, and the wealth gap is wider now than it was in the 1960's when Dr. King and others planned The Poor People's March on Washington.

God commands, "FEAR NOT." I learned in English classes that the "you" is understood. You, you, and you must GET UP, STAND UP FOR YOUR RIGHTS! Otherwise, oppressors will continue to arrest you, murder you, foreclose your property, steal your pensions, and send your children to die on battlefields in avoidable wars. "The limits of tyrants are prescribed by the endurance of those whom they oppress" ~Frederick Douglass.

I will continue to fight until justice comes. Whether ‪God chooses to use me as a martyr or a living testimony is His choice. Either way, I will remain a beacon of light that tyranny cannot extinguish.

"If there is no struggle, there can be no progress."
http://www.blackpast.org/1857-frederick-douglass-if-there-no-struggle-there-no-progress