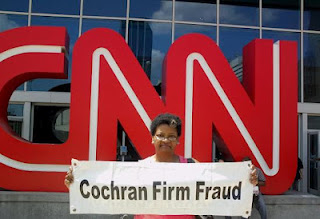 Mary Neal exposes hypocrisy in government officials and media
to cover-up The Cochran Firm Fraud against minorities in America,
including the Ramapough People of New Jersey.
(seven(7) links, 1 photo)    The following information comes from an excerpt of my "Open Letter to The Ramapough People re Cochran Firm Fraud" at this link http://marylovesjustice.blogspot.com/2012/03/maryneal-to-ramapough-people-re-cochran.html


WHAT ON EARTH HAPPENED TO THE COCHRAN FIRM AFTER JOHNNIE'S DEATH?
I will try to answer in this article with seven(7) links.  Former Cochran Firm partner, SHAWN CHAPMAN HOLLEY explains the racist direction Johnnie Cochran's new partners took against minorities after Johnnie died when she interviewed with NPR in 2007 at this link http://www.npr.org/templates/story/story.php?storyId=12171473 - Shawn Chapman Holley is an ethical attorney, so she had to go. She sued The Cochran Firm for racism, sexism, and fraud.

VICKI GILLIAM represented the Ramapough People against Ford Motor Corporation earnestly until she was suddenly taken off the case that was worth between $2billion and $3billion. The Ramapough People's case was then handled in The Cochran Firm's home office in Dothan, Alabama, and devious partners settled the Mann v. Ford case for a mere $12.5 million, not enough to pay for the tribe's sick Native Americans' ongoing medical care, much less address the tribe's many wrongful deaths. Vicki Gilliam is an ethical attorney, so she had to go. Now she has her own law firm. Listen to Ms. Gilliam speak about the Ramapough People's case to Terry Lowry in during a two-part interview (two(2) links):
Vicki Gilliam interview Part I  http://www.terrylowry.com/audio/110718VickiGilliam1.mp3
Vicki Gilliam interview Part II http://www.terrylowry.com/audio/110718VickiGilliam2.mp3

In the edit field, the second Vicki Gilliam link is a different color and so is the Shawn Chapman Holley NPR interview link. I selected for all links in my articles to be the same color, but cyberstalkers apply censorship coding to my links often. When using a cellphone, I found that some links will not open. A team of cyberstalkers were hired to monitor and interfere with my computer input 24/7 to contain damaging information about The Cochran Firm, which I believe is a CoIntelPro agent against minorities. That is why the media pretends not to see me outside their offices with my COCHRAN FIRM FRAUD sign. There are no attorneys in Johnnie Cochran's Los Angeles office who worked with him. The firm reportedly eliminated all people who worked with Johnnie Cochran in his original law office after his untimely death, including attorneys and staff. Now partners in the Los Angeles office are suing each other over sex with the staff and Johnnie Cochran's name. See http://freespeakblog.blogspot.com/2012/03/cochran-firm-partners-buy-sex.html  "Cochran Firm Partners Buy Sex."