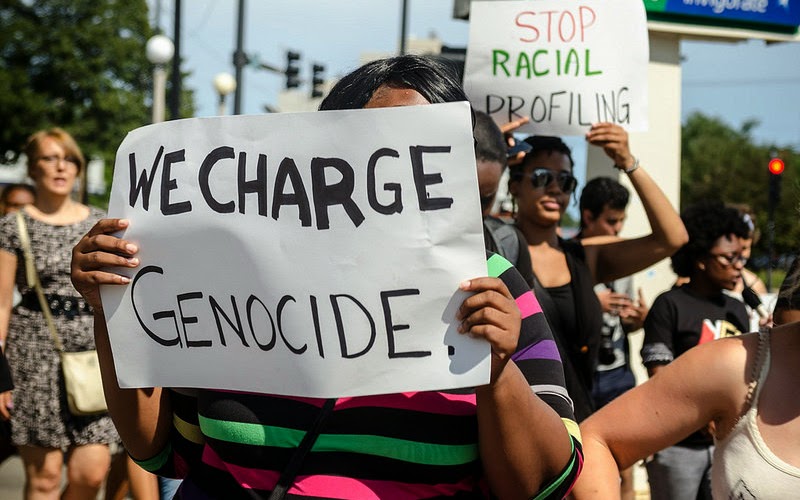 I would be presumptuous and fatuous to claim to speak for many descendants of enslaved Africans if I had not been the undisputed, foremost investor, for the past forty years, in the effort in New York to end police brutality in and about its streets and in courthouses coupled with a sacrificial effort to end unfettered racism in its judicial system.

"Not all cops are bad" fails to describe the plight of descendants of enslaved Africans in the United States. The problem starts with us being remembered and institutionalized as "imported" in Scott v. Sandford. In a "land" that we built, without any semblance of wages, we can never become immigrants. Words also kill.\

In Our Time Press dated December 25, 2014, I was given an opportunity to pen a "Guest Op Ed" article entitled "An Intelligent Response to Police Killings." This opportunity was a milestone in a city where the practice of censorship is routine including it being practiced by Black radio talk show hosts and the Black media.

Many people view nationwide and international protests and demonstrations as exercises under the First Amendment. While these protests are well-meaning, they are misdirected. For example, the institution of slavery ended, in New York, on July 4, 1827 but the "badges of slavery" have continued, incessantly, in New York, up to the present time. This stipulation was grounded in New York's gradual emancipation statute of 1799 and was given wings on November 10, 1821, by white males exclusively.

This matter of unchecked, police crimes in the United States is of international concern since "genocide" is an international crime. We Charge Genocide reflects the letter and spirit of a historic Petition in 1951. "Addressed to the United Nations it was submitted to that body in Paris, France at the Palais Chaillot where the Fifth Session of the General Assembly had gathered."

Asecond delegation, led by Paul Robeson, a resident of New York, presented copies "to the office of the Secretary General of the UN in New York." In 1948, the State Department had initiated a policy of refusing to issue passports to dissidents. This class included Robeson who was placed on a "white list" for exercising First Amendment rights. This was an indefinite, "bill of pains and penalties."

The U.S. Justice Department was not established until 1870. By 1877, a federal electoral commission fashioned the Compromise of 1877which would constructively, if not actually, return most descendants of enslaved Africans back to their former slavemasters. To seal the deal, President Grover Cleveland, appointed August H. Garland as attorney general of the United States. Garland was a Confederate loyalist.

Under the "separation of powers" doctrine, New York has operated as a quadrumvirate. All of these titleholders have been almost, with one exception, white men since the Nineteenth Amendment. The chief judge of the New York Court of Appeals is not even elected by its citizens. This gives great deference to a plutocracy. In 1827, New York established a timocracy. It continues until this day. Accordingly, New York is "a state that enshrines white men." It is not "a state that enshrines equal laws."

In 2008 in the New York Amsterdam News, I explained to its readers why you would become the first person of African ancestry to acquire a lease on the "White House." It started with Black soldiers saving the Union. Nonetheless, America was outraged when President Theodore Roosevelt invited Booker T. Washington to the Executive Mansion. It would become known, afterwards, as the "White House."

Given these circumstances, I was aware that your presidency would cause great and irreparable harm to persons of African ancestry. White supremacy still sits on the throne. I was correct on both counts. History will not treat you kind if you view descendants of enslaved Africans as political baggage. After more than four hundred years of unpaid labor and state-sponsored terrorism, we deserve more than disparate treatment.

This writer concurs with the charge of genocide against the USA. Assistance to the Incarcerated Mentally Ill ("AIMI") is preparing to take up to 100 cases of negligence, brutality, prisoner torture, and wrongful deaths by police to International Court in 2015. The affected parties will be mentally ill people of all races and their families or victims (many victims of untreated mentally ill people and drug/alcohol addicts who suffered and/or died because of denied treatment). WE CHARGE GENOCIDE. Our charge is not only based on race, but Americans with mental disabilities and people who lack wealth are also victimized. See more information at http://AIMI-HumanRights.blogspot.com

The website called "Killed By Police" attempts to publish deaths by police, whether or not those deaths might be considered "justified." The site provides this information based on news reports, but many deaths are covered up, like my brother's secret murder while under secret arrest in Memphis Shelby County Jail was. See the website at this link
http://www.killedbypolice.net/﻿

We congratulate the U.S. Congress for passing a bill recently demanding that all police departments and corrections facilities (prisons and jails) must report every death in custody to the FBI, whereas they presently only report the deaths they want. We urge President Obama to sign the bill into law. Withholding reports about deaths in custody and police incidents is irresponsible and defeats the United States Department of Justice's mandate to protect the civil and human rights for all people in America. NO MORE SECRET ARRESTS AND MURDERS IN AMERICA.