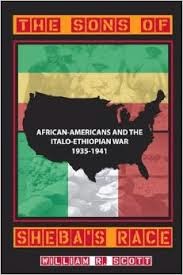 Dr. William Scott, a renowned African American historian, taught at the University of Wisconsin (Madison), Harvard University, Oberlin College, and Lehigh University, and was the first black dean at Wellesley College. He is the author of a number of scholarly articles and three books on African American history that are recommended reading and text books for colleges and universities. Dr. Scott helped to set up an African American Studies program at Clark Atlanta University. Is this why his first male offspring, Terrell Scott, has been imprisoned for over five years in Pennsylvania without a trial?

2. In his long career in academia, he has taught at the University of Wisconsin (Madison), Wellesley College, Harvard University, Oberlin College, and Lehigh University. He is the author of a number of scholarly articles and three books on African American history. He says the most important of these studies was his Sons of Sheba's Race, a study of worldwide black reactions to the Italian invasion of Ethiopia in 1935, which he published with Indiana Press in 1993.

3. The focus of Dr. Scott's research has been Ethiopian symbolism in U.S. black thought. His work seeks to describe and explain how ancient and modern Ethiopia served as a significant liberation emblem and source of inspiration for people of African descent throughout the world. For the past year he has been working on a new book, which he has entitled Redemption Psalm. It explores the role Psalm 68:31, "Ethiopia shall stretch forth its hands unto God", has played as a divine promise of black salvation, spiritually and secularly. It will be the first published full-length study of the subject.

4. Dr. Scott has traveled extensively---to Ireland, Germany, Austria, England, Barbados, the Virgin Islands, Antigua, the Bahamas, and Puerto Rico, but mostly to Africa. He has visited Ethiopia, Kenya, Tanzania. Lesotho, Swaziland, Botswana, and South Africa. He worked out of Johannesburg, South Africa over a period of ten consecutive years with the Educational Opportunities Council, headed by Archbishop Desmond Tutu. This was in the 1980's during the racist Apartheid era. He also served as Associate Dean at Wellesley and Oberlin College; Dean of Arts and Sciences at Clark Atlanta University; Director of the UNCF/Mellon Minority Fellowship Program; and Director of Africana Studies at Wellesley College, Oberlin College, and Lehigh Universities. In this regard, he has been an early architect of black studies in American colleges and universities.


5. A longtime Christian, Dr. Scott was previously deeply involved in the Cultural and Scholarship Ministry at the Greater Shiloh Church, located in Easton, Pennsylvania, which he joined in 1997. He recently wrote and narrated a 90 minute video history of the church's history entitled "A long Walk by Faith: History of the Greater Shiloh Church, 1904-2010". He has occasionally spoken at the Church on the subject of God's role in Black History.

6. This is a topic, he says, "That does not seem to get much attention in our churches. Congregations learn all the time what God did, for instance, in the lives of ancient Jews. But hardly ever is anything said about what the Almighty has done in the history of people of African descent. It's as if He never did anything for us as a people."

7. The lack of an appreciation of the history of people of African descent, he believes, is a critical reason why large numbers of black youth seem to have so little respect for themselves and education. In addition to being "saved", our youth," he says, "would benefit greatly from developing a positive sense of themselves as a people of African heritage. It's hard to identify any people who are grossly ignorant of their past going anywhere in this world as a group. It seems to me there aren't any."

8. It was Dr. Scott's mother Eleanor (Sugie) Smith, now 90 years old, who originally taught him the love of books although she, herself, never finished high school and was employed as a domestic worker her entire life. "Mom never thought she could do better, even though she could conjugate complicated Latin verbs and out-spell almost anyone." His daughter Holly Benin Alston, and grandsons, Kai, Amari, De'jour, and Terrell, who live in Easton and Bethlehem, all share his love for black history and intense devotion to social justice. "I thank God daily", says Dr. Scott with a broad smile, "for their love and support." 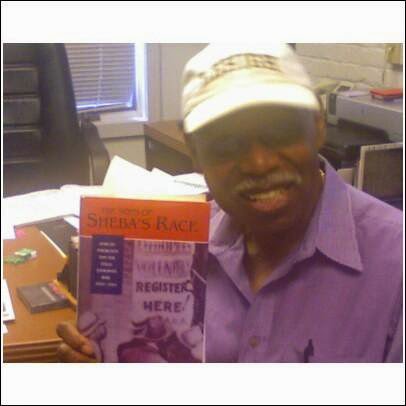 Dr. Scott has now retired and battles heart disease and lung cancer. His firstborn grandson, Terrell Scott, is a mentally ill young man who was arrested on the word of a middle aged white woman who used Terrell as a sex slave for four years. Terrell was arrested on Crystal's unsubstantiated allegations that he sexually abused her minor daughters. In fact, Terrell saved the children from their mother's negligence and abuse by reporting Crystal to Pennsylvania's Child Protective Services. His allegations were investigated and found to be true, and the children were removed from Crystal's custody. Crystal retaliated months later by levying false charges against Terrell.

The legal system persecutes Terrell Scott and withholds his Sixth Amendment right to a public trial. Terrell's entire family, including Dr. Scott, suffers from legal abuse syndrome because of Terrell's false arrest, denial of human and civil rights, and torture in prison. Is this Dr. Scott's payback for teaching African American History in colleges and universities throughout America and in other countries? Is this professor of African American Studies now treated like a government whistle blower and his offspring like a slave?

Information about Terrell Scott's unprecedented denial of human and civil rights is chronicled in online articles by Mary Neal (Google "Terrell Scott Mary Neal"). See, for example, "Terrell Scott - Too 'Crazy' for Trial, but Competent for a Plea Deal" at
http://freespeakblog.blogspot.com/2014/01/terrell-scott-too-crazy-for-trial-but.html﻿

Assistance to the Incarcerated Mentally Ill (AIMI) is bundling up to 100 cases of negligence, abuse, and unrequited murders of mentally ill people and drug/alcohol addicts of all races to present to the United Nations in 2015. Terrell Scott's case will be presented in International Court for relief and restitution and as an example of America's denial of human and civil rights to Americans with mental disabilities - a historic and ongoing problem in the USA. All persons who have been negatively impacted by the USA's negligence to treat mentally ill Americans and drug/alcohol addicts are also welcome to join the class. For information, please see our "AIMI-Human Rights" website at
http://AIMI-HumanRights.blogspot.com

Holly Alston, Terrell's mother, gave an update about Terrell and participated in a discussion about criminalizing mental illness, racism, prejudice against GLBT citizens in the legal system, and torture in domestic prisons on Human Rights Demand at Blogtalkradio, Dec. 17, 2014
http://www.blogtalkradio.com/humanrightsdemand/2014/12/18/human-rights-for-prisoners-march--dec-17-2014 - Access 24/7.﻿

Two reviews of Dr. Scott's scholarly work are below:

"The Sons of Sheba's Race: African-Americans and the Italo-Ethiopian War, 1935-1941" illustrates the response to the Italo-EthiopianWar of people of color who linked the Ethiopian struggle to their own battles against racism and imperialism. William R. Scott demon­strates the significance of Ethiopia as a his­torical symbol for African-Americans. They prayed, preached, and protested to help save the world's last outpost of authentic black rule from white control. The African-American response to the Italian invasion of Ethiopia provides a picture of black intel­lectual thought in America in the 1930s.

William R. Scott challenges the view that the Great Depression virtually ended sup­port for black nationalism, showing that ele­ments of the nationalist creed remained crucial to black American ideology a de­cade after the decline of Garveyism and contributed to African-American sympathy for Ethiopia. Scott focuses on the pro-Ethio­pian activities of the Harlem united front, which brought together black nationalists, communists, and civil rights moderates. He shows the extensive elite and grassroots interest in Ethiopia's fate and the wide­spread recognition that Ethiopia's indepen­dence was extremely important to black racial pride. The book also cogently exam­ines the issue of Ethiopian racial identity, the controversy over this issue, and its effect on African-American support for the Ethiopian cause.

Pan-Africanism, Africa and African-American relations, and the role of the religiopolitical concept of Ethiopianism all came into play in the doomed efforts to assist Ethiopia in its struggle against fascist tyranny. Scott concludes that black poverty and powerlessness impeded black American efforts to assist Ethiopia, but that prodigious pro-Ethiopian activism produced important new appreciations of Africa, the Western powers, and world race relations among the black American masses.

Beginning with the horrors of the Middle Passage and following African American history through to modern topcis of post-Civil Rights politics, this volume provides an overview of the African American Experience. 23 historians offer a variety of perspectives on topics sucha as urbanization, religion, family life, class literature, music, and education in articles covering slavery, Reconstruction, the formation of black identity and culture, and the Civil Rights movement.

...a collection of essays by top scholars that makes compelling reading for anyone. -- Morning Call

This one-volume, comprehensive overview of African American history brings together original essays by some of the foremost authorities in the field. Arranged both thematically and chronologically, these papers discuss a wide range of topics - from the Middle Passage to the Civil Rights Movement; from abolition to the Great Migration; from issues in religion, class and family to literature, education and politics.
Paragraph 1 repeated: Dr. William Scott, a renowned African American historian, taught at the University of Wisconsin (Madison), Harvard University, Oberlin College, and Lehigh University, and was the first black dean at Wellesley College. He is the author of a number of scholarly articles and three books on African American history that are recommended reading and text books for colleges and universities. Dr. Scott helped to set up an African American Studies program at Clark Atlanta University. Is this why his first male offspring, Terrell Scott, has been imprisoned for over five years in Pennsylvania without a trial? 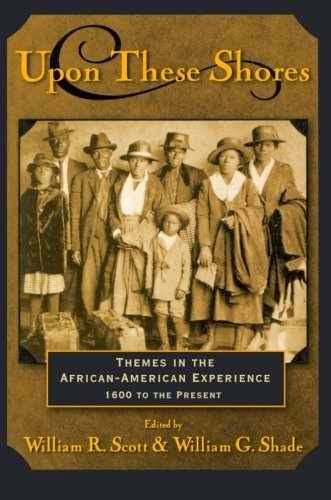 Posted by MaryLovesJustice Neal at 5:41 PM

In case some readers believe that persecuting a teacher's family because he taught black history is unlikely, please note this week's headline, which was added to this article as an update: