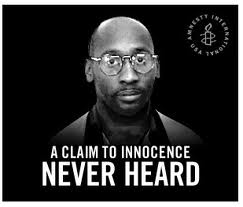 September 21 will be the first anniversary of Troy Davis's execution. Davis was never given a new trial by jury to hear his claim to innocence. Davis requested that we "continue to fight this fight" to clear his name. Will you do that? Please sign the petition requesting re-investigation of Officer Mark MacPhail's murder. The petition is addressed to Georgia Bureau of Investigations and the U.S. Department of Justice.

Petition to re-investigate the murder of Officer MacPhail
http://www.gopetition.com/petitions/re-investigate-officer-macphail-s-murder.html
We, the undersigned, hold that Officer MacPhail's murder should be thoroughly investigated in light of recanted and tarnished witness testimony, a faulty initial investigation that was highly prejudicial toward Troy Davis, and his poorly financed defense during the original trial and appeals process. These factors led to the conviction and execution of Troy Anthony Davis without proof of guilt and the possibility that Officer MacPhail's murderer thwarted justice. A thorough investigation is warranted and hereby demanded.
Hear Troy Davis's last words, affirming his innocence and carrying his final request:

If the world's largest initiative for justice can be ended simply by killing the principal, then no justice quests will be given more regard than children's tantrums in the future. Let us "keep fighting this fight" for the sake of Troy Davis and everyone who is or will be incarcerated or executed without proof of guilt.

Mary Neal, director of the Davis/MacPhail Truth Committee, an online advocacy against the death penalty, especially for persons whose guilt has not been irrevocably proved and for inmates who should be exempt from capital punishment because of their mental illness or juvenile status
Posted by MaryLovesJustice Neal at 8:40 PM