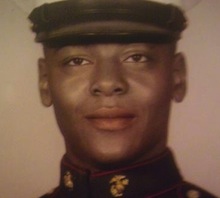 Although most black men killed by police are young, Kenneth Chamberlain, Sr., a 68-year-old African-American Marine veteran, proves old age and disability are not deterrents. Chamberlain was fatally shot in November by White Plains, NY, police who responded to a false alarm from his medical alert pendant. The officers broke down Chamberlain’s door, tasered him, and then shot him dead. I used to live next door to an elderly lady whose medical alert pendant issued false alarms. Police and a fire truck would respond only to find no emergency. It must get frustrating. Police sometimes have a very low tolerance for handicapped people, especially black ones, so watch out! My mentally, physically handicapped brother's secret arrest and murder proves that at Wrongful Death of Larry Neal website http://wrongfuldeathoflarryneal.com . Larry, a lifelong schizophrenic heart patient, sometimes sang loud in a business area in Memphis, Tennessee. He hospitalized for 20 years until mental hospitals were closed and downsized in the 1970s to use mental patients to start private prisons. Please also pray for elderly black women. Kathryn Johnston, 92, was killed in a home invasion by Atlanta police in 2006. Invading police blasted Johnston in a hail of 36 bullets and 6 hit her. They then handcuffed the dying elder and planted drugs in her home to excuse their break-in.

Audio of Chamberlain's death by Taser and shooting death are available. Listen at this Democracy Now link http://www.democracynow.org/2012/3/29/killed_at_home_white_plains_ny

It was recorded by the medical alert device in Chamberlain’s apartment. Please help Mr. Chamberlain's family by signing a petition at MoveOn.org. Will you sign our petition? Click here to sign and please share with your friends:  http://www.moveon.org/r?r=273615&id=38418-17184092-Dl9Jm6x&t=3

May 3, 2012 UPDATE: McLaughlin, the family's civil rights attorney, speaks to the press after the grand jury decided that Chamberlain's murder by police was justifiable http://www.lohud.com/VideoNetwork/1620087200001/Chamberlain-Press-Conference

I am thankful that MoveOn.org and Democracy Now are speaking up for Chamberlain's survivors. My brother's inexcusable kidnapping and murder were covered up by Shelby County Government and the United States Department of Justice, which was in overview of the "jail from hell" after a lawsuit by the U.S.A. If government agencies want a death covered-up, the media and some organizations ignore it. See if they steal my final paragraph that begins with "The 21st century wrongful deaths suffered by Africans in America amount to a staggering number . . . " Larry Neal's elaborate murder cover-up makes me wonder how many police killings really happen in a year. The wrongful death government officials focus their outrage on is Trayvon Martin's murder in Florida. Martin's shooting death does not subject government entities to a wrongful death lawsuit, because the shooter, Zimmerman, was a neighborhood watchman, not a police officer. Smart choice, officials!

When covered-up police murders like Larry Neal's happen, the media, civil and human rights organizations, churches, and others with New World Order affiliations pretend the death never happened, and families who defy the cover-ups are censored and terrorized by organized gangstalking, computer takeovers, and phone taps (allowed or done by government officials and ignored by civil liberties organizations). Victims' survivors can expose police murders on the Internet like I do until net freedom is finally destroyed by Congress. Families can also register their loved ones' deaths with STOLEN LIVES PROJECT at this link: http://www.stolenlives.org/Submit-Case.html  - Truth is the light; let it shine! See if stalkers allow five links to remain in this article and actually lead to the targeted data. My articles are zealously censored to continue Larry Neal's murder cover-up and hide The (Johnnie) Cochran Firm fraud against grieving families. Try to protect Chamberlain's family from the lawyers who sign contracts with minorities then work for police and large corporations behind their own clients' backs to reduce or eliminate payouts for wrongful deaths. The family of Marine Sgt. Loggins, who was killed by an Orange County, California sheriff's deputy in January, already fell prey to that CoIntelPro law firm that tricks blacks in Johnnie Cochran's name. Minorities, including elderly and/or handicapped people like Chamberlain, are killed by police regularly. It is political posturing to focus on Trayvon Martin's death by a private citizen because his murder affords no opportunity to sue any government agency. Happy election year!

The 21st century wrongful deaths suffered by Africans in America amount to a staggering number, especially when adding the covered-up murders of inmates and inpatients and homeless people by authorities. We could start our own wall, like the one commemorating Vietnam's fallen soldiers. No matter how many elitists and "civil rights heroes" grandstand on Trayvon Martin's casket, I maintain the opinion Michael Jackson had: They don't care about us. See MJJ's video at this link http://youtu.be/QNJL6nfu__Q . Therefore, while marching for Trayvon Martin, African Americans and middle class or indigent whites need to concentrate on including LOUD opposition to NDAA, the bill Congress and the White House passed to authorize INDEFINITE MILITARY DETENTION without criminal charges, or there could be hundreds of thousands of Trayvon Martins, including YOU. Do not be diverted by another of MANY deaths and neglect to insist that your own children grow up in a real democracy where they cannot be snatched from their villages without cause. Support congressional bill H.R.3785 to repeal NDAA. PLEASE WAKE UP, SHEEPLE!