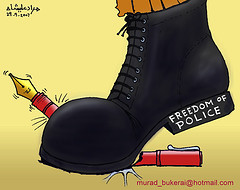 CHANGE
A 21st Century Slave Song by Mary Neal
(all rights protected)
I was so tired of whites stepping on me
I prayed, and things did change
Now half the boots encase black feet
But that still doesn't ease our pain

Note:  I first used the "freedom of police" photo above in an article I published at NowPublic.com on April 11, 2009, over three years ago, where I wrote as "duo." It is strange how much has NOT changed in three years. I'm still sitting at home fighting cyberstalkers and followed by in-person stalkers when I leave - all to hide my disabled brother's 2003 secret arrest and murder by police and The Cochran Firm fraud. The article is called "Blogger's Home Raided by Phoenix Police - He Criticized Them."


You are invited to read and share articles by "duo" published at NowPublic.com, including: Blogger's Home Raided by Phoenix Police - He Criticized Them | NowPublic News Coverage http://www.nowpublic.com/tech-biz/bloggers-home-raided-phoenix-police-he-criticized-them#ixzz1sD9KIYkj

This article with my "Change" poem contains ten(10) links. I have to list my input because the Georgia plantation cyberstalkers delete my Interenet data faster than their grand daddies picked Massa's cotton after being chained and sent here by Africans! How are things for you? Support H.R.3785 to eliminate NDAA's threat of indefinite military detention without criminal charges and without any opportunity for defense. Ancestors of African Americans were captured and interned indefinitely in America, and the Japanese were interned in camps during World War II. The last people who endured indefinite military internment in Europe were the Jews, six million of whom were killed. Such unjust laws are traditionally used against MINORITIES and whites who oppose the injustice. Ask your representatives to eliminate Sec. 1021 under NDAA, because:

This article with my "Change" poem contains ten(10) links. I have to list my input because the Georgia plantation cyberstalkers delete my Interenet data faster than their grand daddies picked Massa's cotton after being chained and sent here by Africans! How are things for you?