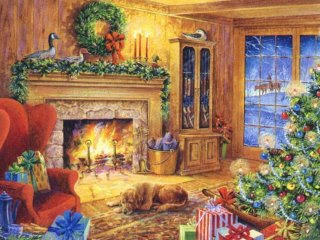 There is an empty chair at our Christmas table

That was yours to fill

It’s been six long years since you left us

And we don’t know why – still

But no one will answer our query

Why was he arrested – why did he die

Please tell us what happened to Larry

"No explanation! No records! Stop asking!"

This is the official reply

From all the government offices

But we’ll not give up, my brother

That should have been filled by you

You’ll have a sound heart and clear mind

No longer last and least

In jail for mental illness

May our commitment never fade!

Each year, I have one word to change in my Christmas poem: the number of years Larry Neal's family has been denied records and accountability after his secret arrest and elimination as an unwanted black mental patient. If someone had told me on August 1, 2003, when Larry Neal died under SECRET ARREST in Memphis Shelby County Jail that his death would be unresolved six years later and that his family would be terrorized for seeking justice, I would not have believed it was possible - not in America.  But unlike animal protection laws, laws against murder are not necessarily enforced if the victims are black, poor, or handicapped people.  Larry was killed, and a wrongful death coverup was then facilitated by The (Johnnie) Cochran Firm.  The lawyers defrauded my family by contracting with us to sue Shelby County Jail for Larry's murder there, then secretly kept our case inactive for nearly a year while the statute of limitations ran.

Memphis boasts of having an excellent program of jail diversion and assistance for the mentally ill.  It trains police departments across the country regarding its Jericho Project and CIT program. Congratulations to Memphis and all cities that employ jail diversion and improve the availability of treatment for  for mental patients, but the way Larry Neal was secretly arrested and killed and his survivors are yet denied accountability and records after his death are nothing that other police departments should imitate. Pharaohs decided not to address Larry's death and to defraud, intimidate, and stalk his family for not forgetting about him. News reports about these crimes are withheld by mainstream media.  Censorship is a major problem in the United States, especially when citizens are victimized by authorities.  Therefore, the only reason you know is because Larry's family uses the Internet despite cyberterrorists who are employed by racist Nazis* to prevent our reports.  Memphis CIT never answered the letter at this link:  www.nowpublic.com/health/letter-memphis-cit-mary-neal

Authorities do not see fit to explain why Shelby County Jail ignored Larry Neal's missing person report and repeatedly denied having the mentally ill heart patient.  Larry was under secret arrest for18 days before he was returned to us - dead.  Surprisingly, the jail was already under federal overview for violating inmates' rights, but Larry's death is denied investigation.  Similarly, China probably sees no need to give any explanation about hundreds of people China arrested for protesting before they went "missing" (link below).  Before hundreds of people go "missing" without explanation in the U.S., it would behoove Americans to inquire about the first one by emailing the Department of Justice at this link:  AskDOJ@USDOJ.gov
In fact, another citizen suffering from mental illness has already gone missing, last seen in police custody in California:  Mitrice Richardson - http://www.facebook.com/group.php?gid=158453601982 - Are YOU missing any relatives with schizophrenia, manic depression, bipolar disorder, Autism, PTSD, or Alzheimer's?

Jail diversion is effective in preventing more chronic mental patients from being incarcerated, but it does not address the 1.25 million mentally dysfunctional citizens who are already imprisoned rather than hospitalized or treated in their communities.

As we enjoy the holiday season with our families, let us be cognizant that 60% of the 25,000 inmates in solitary confinement are mentally ill people.  People in solitary usually are not allowed visitors, and some people have lived in 9 ft x 6 ft cells for over 20 years.  The mentally ill are usually kept naked and sleep on bare iron slabs for fear that they would hang themselves if given clothes or a mattress that could be torn and used as a noose.  They will have no Christmas.

Please join our quest to decriminalize mental illness, end capital punishment, excessive sentencing, and establish equal justice for all. People do not work to gain something they think they already have. Equal justice is something we sorely lack, so let us strive to achieve it for all Americans. Liberty and justice for all is POSSIBLE, but only if we pray like everything depends on God, but work like everything depends on us.
__________
*Racist Nazis are not always Caucasians.  Except for two occasions, my stalkers were Negroes (dated term intentionally used).  Suggested reading:  Racism without Racists, by Eduardo Bonilla-Silva.  Unfortunately, many people are blinded by their own prejudice and wrongly assume that oppressors always look different from themselves, a dangerous presumption.  Pictorial history lesson, African Confederate soldiers: 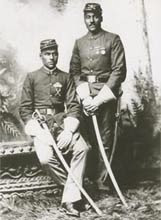 I have a dream that my four children will one day live in a nation where they will not be judged by the color of their skin but by the content of their character. ~ Martin Luther King, Jr.

This holiday season is leaner than usual for many Americans.  I have been deprived of income from working as a legal assistant since serving suit on The Cochran Firm for its fraud, having been followed and accosted numerous times since January 2008, but I am denied police services.  Our lawsuits against The Cochran Firm were unethically blocked from going before a jury both times we sued the duplicitous law firm. I am also wrongly deprived of revenue from any of the ads that run at the sites of my articles and blogs.  Poverty and terrorism are my punishments for standing for justice, according to Mark 8:34-38.  Despite the fact that I, like many people, will not be able to give material gifts this year, I send you my greetings.

Assistance to the Incarcerated Mentally Ill

If you're missing any faces at your dinner table, particularly disabled family members, you should pretend not to notice, or else!

Petition against Censorship and Terrorism Against Mary Neal
www.thepetitionsite.com/2/Justice4MaryNeal

See the index of articles in my blog at the left margin of http://freespeakblog.blogspot.com/  Help give voice to the voiceless by sharing this or any of the articles in the FreeSpeak blog.  A convenient "Add This" feature is also provided in the left margin.

Mine is the first American family this century to have a member secretly arrested and returned as a naked corpse but denied explanation, records, and investigation.  First, they came for Larry Neal . . .

Tag! You're next!  Concentration Camps Proposed in Congress - H.R. 645
http://www.nowpublic.com/world/american-concentration-camps-proposed-congress-h-r-645?page=1

Everyone should participate in the struggle to improve justice, and many positive changes are already underway. I advocate by writing, and it is not easy.  My most censored article is at this link:
Human Rights for Prisoners March - http://www.care2.com/c2c/share/detail/1282678

.
Follow me on Twitter, where I am KoffieTime http://twitter.com/koffietime
See more of my articles at NowPublic.com http://NowPublic.com/duo  - and see more links to my work at Mary Neal's Google Profile - http://www.google.com/profiles/MaryLovesJustice  - Get the RSS feed for my Care2 Sharebook at: http://www.care2.com/c2c/share/rss.html/513396753/0/  - Get the RSS feed for my Twitter KOFFIETIME at http://twitter.com/statuses/user_timeline/59790083.rss  - Current, urgent justice issues from a laywoman's viewpoint at my primary blog http://freespeakblog.blogspot.com/  (the name is a joke, believe me).

From Bethlehem's manger to Golgotha's cross, it was all for love.  Merry Christmas.  Support our advocacy for the least of these, His brethren: http://freespeakblog.blogspot.com/2009/10/least-of-these-his-brethren.html  - Phone 678.531.0262 (Our phone may be coded by cyberterrorists to say you reached an out-of-service number like it was last week.)
.
A special greeting to Bill Gates and others who are responsible for inventing and maintaining the Internet.  It is a vital tool for citizens who are targeted for oppression in secrecy.  Sophisticated cyberstalkers make it difficult to publish online, however, when one has censored subject matter.  When I air my videos of real-time cyberstalking at all the Internet sites I frequent, the public will know it is important to fight hard for Net freedom and to prevent online voting from ever being approved.

I WONDER HOW MANY OTHER AMERICANS ARE TERRORIZED FOR EXERCISING "FREEDOM" OF SPEECH, "FREEDOM" OF PRESS, AND USING THEIR "RIGHT" TO PETITION GOVERNMENT FOR A REDRESS OF GRIEVANCES?  I doubt if all of the cyberstalking techniques used against my online input were devised for use against Mary Neal exclusively.
.

Posted by MaryLovesJustice Neal at 4:50 PM