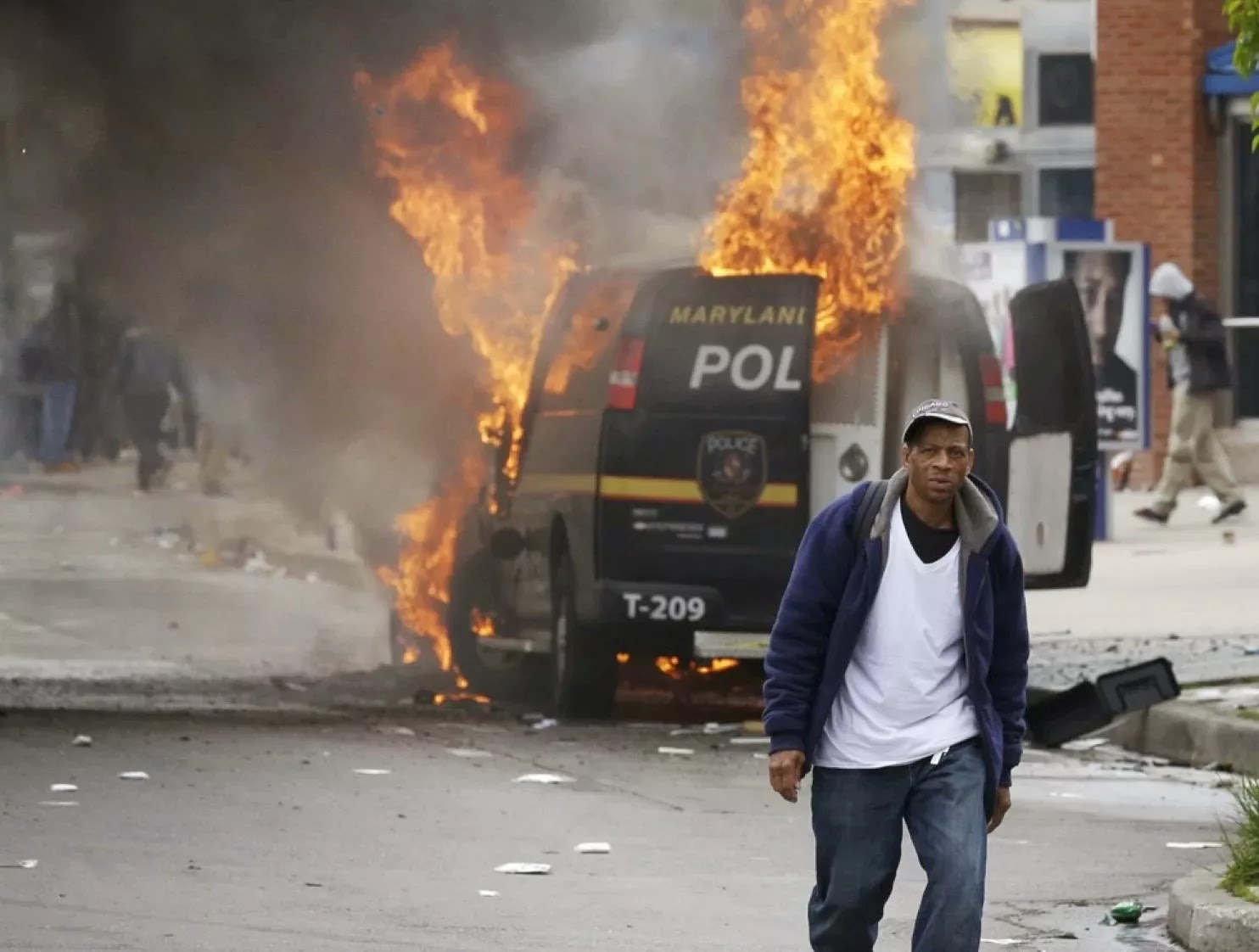 This article was edited May 2, 2015 -- Thank you for your interest in the continuing persecution that Mary Neal and her family undergoes as advocates for the people who experience discrimination and brutality most in the United States of America: the mentally ill. It is our understanding that Freddie Gray had diagnosed problems as a child. He used marijuana to self-medicate and sold marijuana to support his own usage. Some people cite his numerous arrests as evidence that Gray "got what was coming to him." We disagree with eugenicists who believe they are justified to brutalize or murder people who have mental health issues or are drug users/dealers. Under no circumstances are police to assign themselves as executioners. Police in Memphis, Tennessee had no right to secretly arrest and murder Larry Neal 18 days later, and neither did police in Baltimore have the right to kill Freddie Gray. Advocates have the right to voice objections to brutality and murders under the color of law.

Lobbyists for wealthy corporations are welcome in the halls of Congress and in State legislatures. They promote their employers' products and bills that would benefit the corporations that hired them. Poor and middle class people have human rights advocates. Advocates like Mary Neal should be allowed free speech, freedom of press, and every opportunity to expose and oppose corruption that endangers the freedom and lives of people for whom we advocate. To suppress, intimidate, or incarcerate the People's advocates indicates an unwillingness on the part of Government to hear from the People, although the right to contact officials for a redress of grievances was deemed so important that it is included in the First Amendment to the U.S. Constitution.

See another article about concerns regarding my mother's health care, which was originallythe subject of this article
"McMurray, The Cochran Firm, and Hattie Neal"
http://freespeakblog.blogspot.com/2015/05/mcmurray-cochran-firm-and-hattie-neal.html

The article "Baltimore 2015 and Hattie Neal," which was originally in this blog was removed on request from my elder brother. He does not understand what is happening in Atlanta and did not read the article. If I feel that my 92-year-old mother is being threatened in any way again, or if the link above goes missing from this article, expect the original article and more information about our harassment. I am not CoIntelPro's slave.

I shared two articles voicing about my concerns regarding my mother with DeKalb Medical Hospital around 4:30am on May 1 (click to enlarge). This reminds me of the day I sent a complaint about the USDOJ to the Inspector General, waited 30 days for a response that never came, then called that office and was told the message was never received. Despite the fact that some people can manage large corporations from across the world by using computer services, other people cannot rely on computerized receipts because of stalkers. 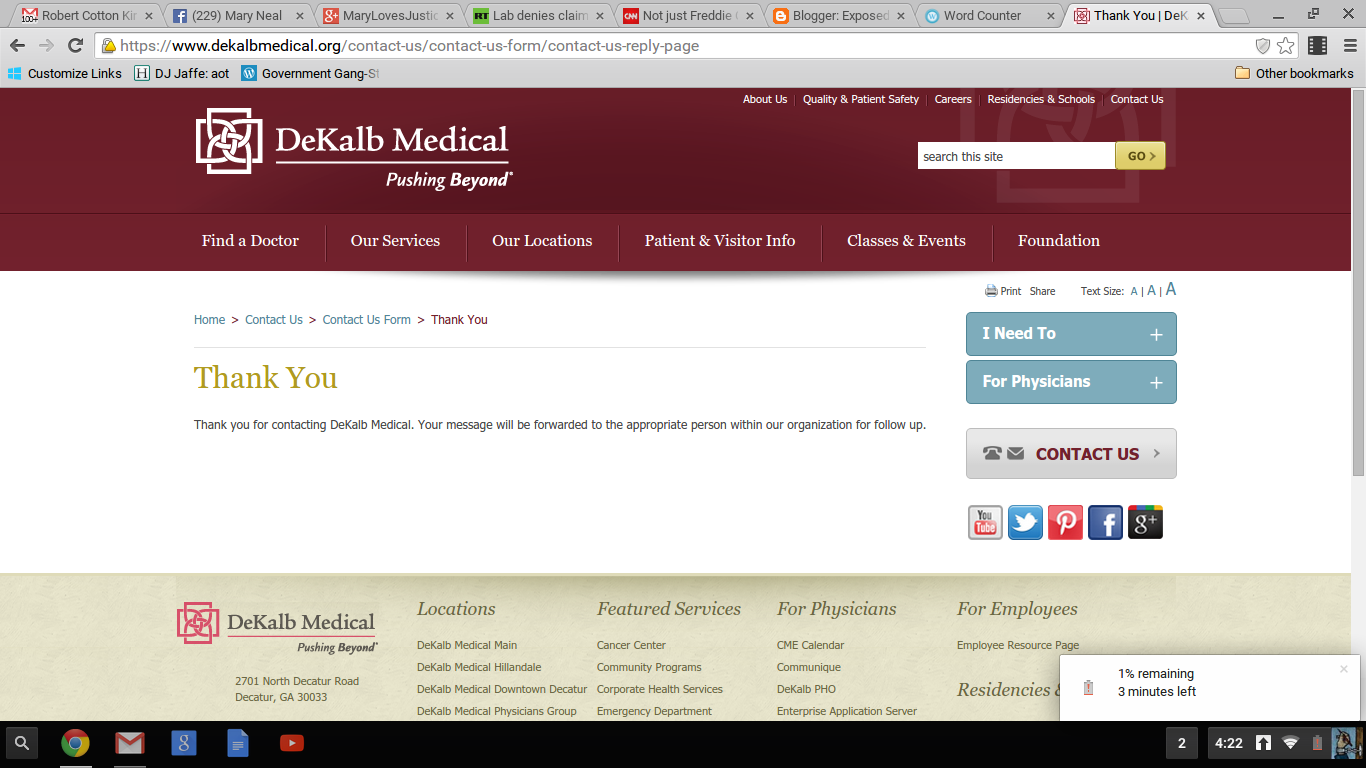 Please read an article about Rev. Vance and access his radio interview in FreeSpeakBlog. Rev. Vance revealed that his doctor defrauded the court by substituting another patient's scan for his own:
http://freespeakblog.blogspot.com/2015/04/mr-vance-im-cochran-firm-fraud-victim.html

Posted by MaryLovesJustice Neal at 6:16 PM

I RESENT my mother going to the hospital for a rash in 2012 and being given conflicting blood pressure medications - one that raises blood pressure and one that lowers it - which damn near killed her and caused her heart rate to fluctuate. I RESENT DeKalb Medical then trying to coerce the 90-year-old into accepting an unneeded heart pacer.

I RESENT my mother going to DeKalb Medical Hospital in 2015 for a bed sore and being frightened by the hospital which gave her scans for bone cancer.

No results or films that result from your tests will be accepted at face value. It should be criminal to terrorize elderly people to charge their insurance more money than necessary.