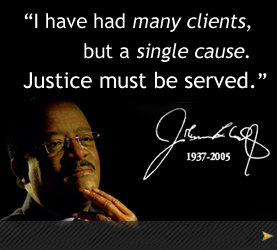 Johnnie Cochran announced his intention to sue the USA and major corporations that used leased slaves, then sold part interest in his firm to some Southern whites. He quickly died, supposedly of an inoperable brain tumor, and The Cochran Firm seems to be used now to defraud people of color in certain cases and save government agencies and major corporations billions of dollars some years on lawsuits it mishandles for African American clients and other people of color. Coretta Scott King, Edward Kennedy, and Martina Davis-Correia, sister of executed death row inmate Troy Davis, also died of cancers, as have many other noted leaders in recent times. Lynne Stewart, a famous civil rights lawyer, was also diagnosed with cancer.

Our guest for April 23 at 9pmEST claims being another victim of The (Johnny) Cochran Firm fraud on "Human Rights Demand" channel at BlogTalkRadio. Call-in number is 347.857.3293. He alleges the law firm defrauded him and worked behind his back for his defendant, a physician. The cancer survivor hired the deviant Cochran Firm attorneys to file lawsuit against his doctor, who misdiagnosed his condition, causing his cancer to reach stage 3 by the time another doctor checked him two years later. Vance seeks an attorney to file a malpractice lawsuit against his corrupt attorneys who he feels deliberately threw the fight for justice against his negligent former doctor. This show was originally scheduled for April 6. If you've ever been defrauded by your attorney, especially The Cochran Firm frauds, please join the conversation tonight. We know there are genuine attorneys who hate what unethical frauds are doing to disgrace their profession. Please listen and prepare to help Vance by filing a malpractice case against a law firm that seems to defraud people of color as a way of life. Many cases are listed here
http://freespeakblog.blogspot.com/2013/01/beware-of-treacherous-lawyers-cochran.html﻿

African Americans and other people of color, as well as everyone who hates frauds, should join us at this show: "Is a Lawyer in the House? Malpractice Claim Against The Cochran Firm Frauds." If you ever had an attorney who betrayed your trust, especially The Cochran Firm, please comment at 9pmEST on April 23. Call (347)857.3293. The show is live on computer and will be archived at the below url:
http://www.blogtalkradio.com/humanrightsdemand/2015/04/24/is-a-lawyer-in-the-house-malpractice-claim-against-the-cochran-firm-frauds

Posted by MaryLovesJustice Neal at 8:48 PM

Email ThisBlogThis!Share to TwitterShare to FacebookShare to Pinterest
Labels: CochranFirmFraud