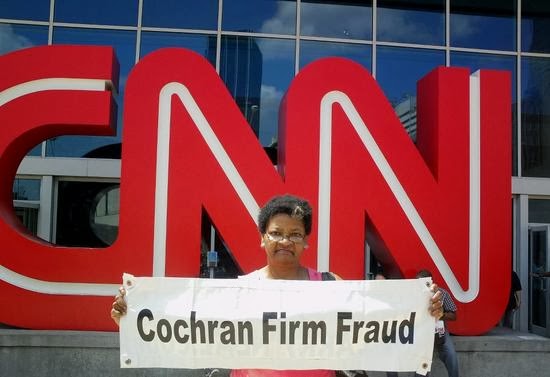 At "Cochran Firm Fraud" blog, you have an opportunity to read and hear about the numerous lawsuits against The Cochran Firm by its former clients, attorneys, law firms that it partnered with on certain cases. Links to lawsuits and radio interviews are available as well as videos. We may also give honorary "Cochran Firm Fraud Awards" to other lawyers who replicate The Cochran Firm's lack of ethics and total disregard for the Code of Professional Responsibility in handling clients' cases. Here is a sample from the new blog:

Black litigants suing for racial discrimination got an Uncle Tommy prank from their lawyers, The (Johnnie) Cochran Firm frauds! They could not believe it, and it wasn't exactly a prank . . .

WE, THE DEFRAUDED FORMER CLIENTS, invite you to read about the white supremacists and black Confederate soldiers who partnered with Johnnie Cochran after Cochran announced that he planned to sue the United States and certain major corporations that owned or used leased slaves and practiced Jim Crow policies against African Americans. He became terminally ill and died soon after. After that sad, early termination, the civil rights attorneys who worked with Cochran in his Los Angeles office were reportedly either fired or forced out of the firm and presumably replaced with people who apparently agreed to give clients substandard legal services, whereas Johnnie Cochran's lawyers would not.

Unlike The Cochran Firm, I cannot afford a room full of secretaries and word processors to click on my links repeatedly to ensure that people of color are warned about this law firm that is frequently sued for working behind its clients' backs to benefit its clients' defendants. The firm was also accused of railroading certain criminal defendants into jails and prisons. Therefore, we rely on YOU to share the news articles presented in "CochranFirmFraud" blog. Everything I publish is absolutely true and has evidence presented or available.

SOMEBODY hired cyber stalkers to interfere with and delete my Internet posts. Above is a picture of MaryLovesJustice holding the sign saying "COCHRAN FIRM FRAUD." That is the opposite side of the same sign saying "WRONGFUL DEATH OF LARRY NEAL." If you are in Atlanta, you may have seen me displaying the sign at Centennial Olympic Park, the annual Malcolm X picnic, Occupy Atlanta, in front of NAACP (bougie Negro) events, during marches for Troy Davis, workers' rights, anti-death penalty rallies, and walking down Peachtree Street, which has a Cochran Firm office that "disappears" when one sues the firm for fraud and malpractice. I wish I could rent a blimp to fly a huge sign daily throughout the summer.

Below is news about Johnnie Cochran that I was pleased to see another defrauded client might have published - I did not. It delights one to know that more former clients are also taking action to warn our people. The world is learning anew what a great legal warrior Johnnie Cochran was. We can only imagine what happened to him after announcing his intention to sue for slavery and Jim Crow reparations. He probably sold interest in his firm to raise money for the reparations lawsuit. White supremacists and black Confederate soldiers ruined his law firm but not his legacy. Johnnie Cochran would not have defrauded my then 80-year-old mother to help Memphis Shelby County Jail escape accountability for the kidnapping and Wrongful Death of Larry Neal, my mentally and physically disabled brother, but the partners who now control his firm did. Hotep, Johnnie. 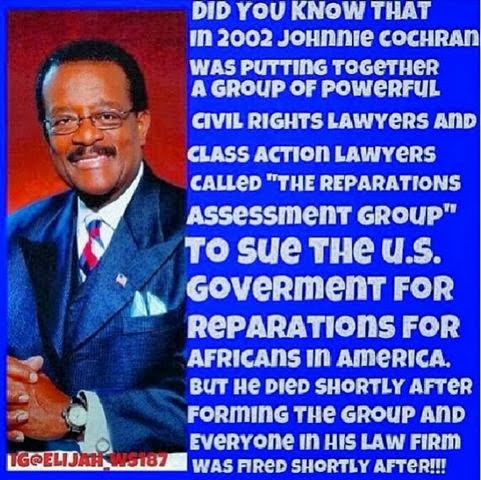 Posted by MaryLovesJustice Neal at 5:33 PM