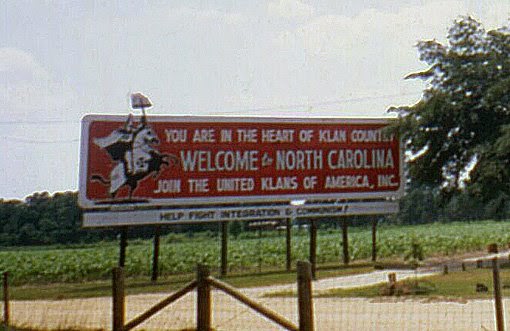 I commend David Adams on the latest report about the Shannon Nyamodi case and coverage about Elizabeth Crudup's alleged assault by Dunn, NC police officers on March 14 in "The People's Champion" blog. The large KKK billboard where Elizabeth Crudup's car was towed by police in Johnston County is absolutely chilling. I had heard about that sign and appreciate Adams featuring it on an article about Elizabeth's ordeal. It does not seem wise for her to attempt to retrieve her car from Johnston County. Hopefully, the Captain of Dunn Police Department retrieves it and delivers it safely back to her as promised. It would probably not drive the car again until having it thoroughly checked by a reputable, trusted auto mechanic. An excerpt from The People's Champion is below:

"The billboard is a very alarming reality and speaks volumes about some parts of North Carolina’s social climate in 2014. Ms. Crudup says that she can’t ever recall anyone who has had their vehicle impounded in the town of Dunn being taken to a tow yard several towns away like her car had been." - See more at:
http://thepeopleschampion.me/#sthash.G9EeXoDY.dpuf

I overstand the concern about Elizabeth Crudup having been assigned night court for her "resisting arrest" charges, especially since night court is unusual in that area. One can only hope that North Carolina's elected and appointed officials along with federal officials and every just-minded person in this country will unite with Elizabeth Crudup to ensure justice for Shannon Nyamodi, her son who has been wrongly detained in solitary confinement for the better part of two years in order to force his confession and plea bargaining on false charges. May Heaven help us all. People should not await a casket on which to grandstand before standing up for innocent black youths and their mothers who are at the mercy of such people.

Thank God 2014 is an election year. Rid America of racists and do-nothings, black and white.


Heaven Help Us ALL - Stevie Wonder
http://youtu.be/TJ6fU2pAz0c
"Heaven help the black man as he struggles one more day. Heaven help the white man if he turns his back away." Please help Elizabeth Crudup and her innocent son, tortured in solitary confinement in North Carolina. Please help them, Lord. Southern police assaulted Shannon's mother and towed her car to a KKK town. Jesus, hear our call! Help us all! Help African Americans to get off their knees begging for justice and take a STAND for justice, knowing You are with us. STOP being afraid, people. Stop ignoring your brothers and sisters who are being treated like Elizabeth Crudup and her son, like Mary Neal and her mother. It is our right to be able to ask for fair trials for arrested black youths like Shannon Nyamodi. It is our right to ask what happened to handicapped black men who were murdered under secret arrest like Larry Neal was. Demand that NSA/CoIntelPro release my communication - censoring me to hide murders and other abuses of power. Proverbs 31:8-9 commands us to stand for poor, oppressed people and everyone who is appointed to destruction. Stop being cowards and sellouts, in Jesus' name. "Fear not, for I am with you," says the Lord. Resist oppression.

1) To the woman who called me today after 4pm Eastern from "817" area code: I listened to your message but was not in the position to write down your phone number at the time. I saved your message in my phone. CoIntelPro quickly removed the message. Please call again.

2) To David Adams, of The People's Champion: I do not seem to have your email address in my gmail account. I tried to open "The People's Champion" blog to see if you record your email address on your cover page, which I strongly advise all journalists to do. However, CoIntelPro prevents your blog from opening on my computer. See SOPA (a congressional law that did not pass) regarding the feds redirecting browsers and preventing access to information at certain Internet links. (After writing this message, your crime news blog opened. Meanwhile, I received your email address from a mutual friend.)

Posted by MaryLovesJustice Neal at 10:18 PM