FBI, Be Honest About Prisoner Abuse

Is there really any federal effort to prevent prisoner abuse and
demand accountability for past crimes against humanity?
​

Russia Today reports "FBI investigates private prison company’s oversight of Idaho’s ‘Gladiator School’"
http://rt.com/usa/fbi-cca-prison-idaho-566/
The American Civil Liberties Union sued CCA on behalf of inmates of the correctional center in 2010, claiming the violence in the prison – due in part to understaffing – was so bad, it was called “Gladiator School.”

People are excited and hopeful to read about the FBI investigating prisons and jails or municipalities for patterns of misconduct. If a pattern of inmate abuse, police brutality, or corruption is found, the facility or municipality may be placed under federal overview by the USDOJ and sign an Agreement to follow federal recommendations for Change. If racketeering, brutality, and violations against human and civil rights continue in the facilities and municipalities after being placed under federal overview, most people do not know what happens then. I know. The feds sometimes help the facilities and municipalities hide their crimes, such as regarding the secret arrest and Wrongful Death of Larry Neal in Memphis Shelby County Jail in 2003, while that correctional facility was under jurisdiction by the United States Department of Justice after lawsuit by the USA for inmate abuse. http://WrongfulDeathOfLarryNeal.com

Therefore, the investigation, government lawsuit, and federal oversight are lies to defraud the people. Survivors' families may then be surveilled, censored, and financially persecuted to prevent disclosure about the unrequitted murders of inmates or other continued patterns of abuse. The solution is much simpler than those being employed. Try justice. It works.

*****
I just sent the message above via email to info@messages.whitehouse.gov and AskDoj@usdoj.gov with copies to my own email boxes. I received no receipt and therefore assume the cyber stalkers prevented the addressees' receipt. Pretending not to know about crimes by having NSA interrupt emails will not work, since I have return receipts from the U.S. Postal Service showing that these matters have already gone to the attention of parties who are responsible for demanding accountability and rendering justice for the police kidnapping and murder of a disabled American, Larry Neal.

After no receipt arrived to my email account saying that my message was received by the White House or the United States Department of Justice, I went to the White House online and entered the information above as a comment. Again, I received no receipt. Even when receipts do come, officials usually deny having received my correspondence, as happened when I filed a complaint with the Office of Inspector General over the United States Department of Justice.

When the Neals sued The Johnnie Cochran Firm in federal court for defrauding our family to help Shelby County Jail hide the secret arrest and murder of Larry Neal, and Judge Timothy Batten dismissed our lawsuit, saying that whatever The Cochran Firm did to prevent accountability for the police kidnapping and murder of Larry Neal, in the jail that was already under federal oversight, was "IMMATERIAL." Whether that is because my family is too black and poor to demand accountability after the government murder of our disabled relative, I cannot say. For whatever reason, our requests for records and accountability are still treated as being "immaterial" today.

Federal officials should be honest about prisoner abuses that happen AFTER federal oversight is in place. Kidnappings and murders such as Larry Neal experienced should not be covered-up after the feds have oversight of facilities and municipalities, but they should be investigated and accountability demanded, no matter how much money or prison stocks may be offered to withhold justice (see the Chaney and Gonzales indictment in Wallacy County, Texas, 2008). Investigations and overview by criminals only yield more crimes and racketeering. 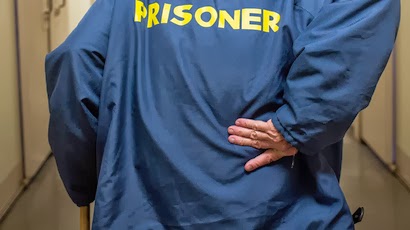 Posted by MaryLovesJustice Neal at 7:13 PM