The weeping mother whose two children were sold into slavery separate from her on the Academy Award-winning movie "12 Years a Slave" was told by the mistress of the plantation where she was conveyed, "Hush; don't carry on so. You'll forget about those children in no time." 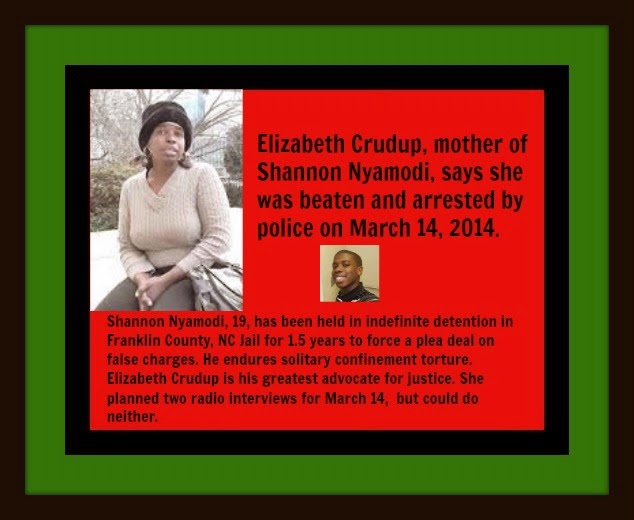 Katherine Crudup, mother of Shannon Nyamodi, 19, was allegedly beaten and arrested by a Dunn, North Carolina police officer on March 14, 2014, while two other police officers look. She and a friend were parking at a Holiday Inn parking lot for a meeting when Katherine Crudup heard someone knock on her car window. She said that upon looking out of the window, she could see the uniform but not the officer's face. She partially rolled down her window and asked why the officer was beating on her window. He responded by ordering her out of the car. She asked what she had done. He responded by again ordering her out of the car with the added threat that he would remove her from the car if she did not exit on her own.

After that, the story gets too horrific for me to describe. If she is able, Katherine Crudup will relay her ordeal on the "Human Rights for Prisoners March" Sunday, March 16, at 3pm EST, guest call-in no: (347) 857-3293, on "Human Rights Demand" Blogtalkradio channel. Hear the tape:
http://www.blogtalkradio.com/humanrightsdemand/2014/03/16/human-rights-for-prisoners-march

Katherine's teenage son, Shannon Nyamodi, was arrested at age 18, not long after his high school graduation, for the shooting of a Caucasian woman who he actually helped. The People's Champion reports that Rhonda McClean was shot in the face at point blank range and robbed of nearly $65,000.00 on August 16, 2013. Shannon was visiting a friend in a house on the cul-de-sac. The gunshot victim stumbled to the house where Shannon was visiting and collapsed on the porch. Shannon helped Rhonda into the house where his friend and other persons lived, and 911 was called.  Shannon waved the police and other emergency responders to the house. When questioned, the woman said her daughter was responsible for her injury. Later the same day, Shannon and his family were surprised when he, the good Samaritan in this story, was arrested for the crime.

Rhonda McLean reportedly said during Shannon's hearing that he was not the person who shot her and that he actually helped her. Rhonda's teenage daughter, who allegedly hired someone to kill and rob Rhonda, is reportedly already in custody serving a two-year sentence. Rhonda has apparently moved out of town and has now reportedly changed her story to implicate Shannon. Crudup does not know if Rhonda was also beaten and intimidated.

Shannon Nyamodi was an electrical apprentice with a clean criminal background who planned to enter military service. He has been indefinitely detained without trial since his arrest. Elizabeth Crudup continuously seeks help for Shannon - help that is not forthcoming from Maitri (MIke) Klinkosum, the defense attorney who Shannon's family retained with "enough money to purchase a house," according to Crudup. She said that Klinkosum seems to work with the prosecutor to force Shannon into a plea deal on the false charges rather than filing a motion for a reduced bond ($500k) and enforcing Shannon's right for a speedy trial.

Shannon has been arrested without trial for 1.5 years, in solitary confinement torture for most of his incarceration. Crudup learned that Attorney Kilkosum recently applied for a continuance in her son's case. When Shannon, and later his aunt, tried to fire Klinkosum, the attorney allegedly threatened them by saying, "If I am fired from Shannon's case, I will work with the prosecutor against him to see that he gets at least 30 years." Naturally, Crudup feels that it was wrong for Shannon's defense attorney to threaten her family and delay Shannon's trial while he suffers in solitary confinement, and she has been vocal about that on numerous radio shows.

Crudup said that as the police officer repeatedly body-slammed her against the police car, he said, "So you think you're a lawyer, huh?"

It seems more urgent than ever for Shannon's prosecutor to either acknowledge the lack of evidence to take the case against Shannon to trial or try Shannon on the charges (with a different defense attorney). Shannon Nyamodi must not be tortured into making a false confession, and his mother must not be brutalized and intimidated to stop her advocacy for Shannon's Sixth and Fourteenth Amendment rights.

Google "Shannon Nyamodi North Carolina" for more information. This high profile court case that smacks of Old South racism is being ignored by mainstream media, but news about it is going forward on the Internet and would already be viral if censorship were not applied to stories exposing injustice to African Americans and people who lack wealth. We trust that persons exposed to this information will help Katherine Crudup's beating and arrest to become more widely known. Since 2014 is an election year, one might hope that local and national officials will intervene before the Shannon Nyamodi case gets more tragic than it already is.

Paragraph 1 repeated:
The weeping mother whose two children were sold into slavery separate from her on the Academy Award-winning movie "12 Years a Slave" was told by the mistress of the plantation where she was conveyed, "Hush; don't carry on so. You'll forget about those children in no time."

Posted by MaryLovesJustice Neal at 11:01 PM

Sis Mary I have been Calling you and kept calling you, but I have not been allowed to get through to you. I can't find the video it's not on my computer anymore I will check in some of my other storage cloud places but right now I can't find it. I thought Sis Elizabeth had help I come to Raleigh NC, at least 3 times a month which she is only 30 mins away. I will reach out to her.
Keep doing what you do Sis Mary, We have the nails and we have the hammer let's nail their ass up! Truth had come to you~

Word, Bro Muhammad. I am not surprised they removed the video wherein I showed Press TV the bloody towels from my directed energy weapon attack. Iran saw the towels, but I never did. The video had already been censored by the time I saw it on the Internet one day, although it was live online for a short period. I trust that it was appropriately shocking. That's ONE of the punishments I got for asking "What Happened to Larry Neal?" (my disabled brother who was secretly arrested for 18 days and murdered - records and accountability DENIED). Elizabeth apparently ran into trouble asking when her son could either be released or tried on the charges.

Thanks for helping Elizabeth and Shannon in whatever way you can.

Question, Brother Maurice: Did "they" play a recording saying my phone is out of service when you called me? That is the usual lying recording that they attach to my phone number.

Whenever we hear about NSA, we hear complaints about lost privacy. Why are so few people discussing the blatant censorship of Internet posts and prevention and interruption of phone calls? Are they afraid, or are messages about the censorship also censored?