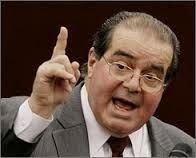 UPDATE March 3, 2014: A year later, we have another reason to admire Justice Scalia, a man who gives us the hard truth. Justice Scalia reports that we have every reason to expect Americans will again be interned in concentration camps, like Japanese-Americans were. This is important for people who thought Congress and the president approved NDAA and FEMA camps for nothing. See the AP report at the link below:


Internments can happen again, Scalia warns
http://www.staradvertiser.com/news/hawaiinews/20140204_Internments_can_happen_again_Scalia_warns.html?id=243454461
Scalia was responding to a question about the court's 1944 decision in Kore­ma­tsu v. United States, which upheld the convictions of Gordon Hira­ba­ya­shi and Fred Kore­ma­tsu for violating an order to report to an internment camp.

"Well, of course, Kore­ma­tsu was wrong. And I think we have repudiated in a later case. But you are kidding yourself if you think the same thing will not happen again," Scalia told [law] students and faculty during a lunchtime question-and-answer session. "That's what was going on — the panic about the war and the invasion of the Pacific and whatnot. That's what happens. It was wrong, but I would not be surprised to see it happen again, in time of war. It's no justification, but it is the reality," he said.

This writer does not need Scalia's warnings about America's tendencies toward Nazism. My mentally, physically disabled brother, Larry Neal, was murdered after 18 days of secret arrest in 2003 in Memphis Shelby County Jail, and my family is censored, intimidated, and financially persecuted for asking, "What Happened to Larry Neal?" I also have a friend, Elaine Riddick, who was forcibly sterilized in America's eugenics program (from 1930's to 1970s) to prevent her from giving birth to more "undesirables" (black people). So I already know. But I thank Scalia for warning the rest of you.

I was very concerned when the U.S. Department of Justice started financing protests after Trayvon Martin's murder, and an employee from Homeland Security went online with messages saying "There's going to be a race war!" I figured they were up to no good - looking for an opportunity to use those concentration camps if they could incite people to violence.

Watch out if America goes to war again. Be prayerful if she feels threatened by a particular ethnic group again. The camps are waiting. Numerous states have nullified NDAA, including Virginia, Michigan, California, and others. More have bills to nullify NDAA under consideration. You can stay abreast of state nullifications at PANDA. http://pandaunite.org/

We also thank Vice President Biden for his statement to a mostly black audience, saying, "He'll have you back in chains." We especially appreciate this announcement from the administration that approved concentration camps and financed them.

See the film below that demonstrates the collusion between psychiatry, racism, and murder. Why are police and correctional officers shielded by the government after brutalizing and killing mental patients like my brother, Larry Neal? Why are biomass incinerators (ovens) situated in black communities and on prison grounds? What happened to the 5,000 murdered prisoners that former Congresswoman Cynthia McKinney told us about after Katrina? Why are mentally ill people warehoused in prisons, usually in solitary? Eugenics and psychiatry have a history dating from before WWII. Hundreds of thousands of people labeled "mentally ill" in Germany were murdered en masse. Racism and Psychiatry http://youtu.be/dJG_6uW7faY
SORRY! One way to get a YouTube video taken offline is for Mary Neal to feature it in an article. Please just go to YouTube and find videos by searching for "racism and psychiatry," and you might happen to see it. Here is another interesting documentary about science and racism: http://youtu.be/2fi9iGBJs4A


MaryLovesJustice
MaryLovesJustice@gmail.com
(678)531-0262
Website:  Wrongful Death of Larry Neal
http://WrongfulDeathOfLarryNeal.com
(Note: They probably won't allow me to receive your emails and phone calls. Sorry.)
Posted by MaryLovesJustice Neal at 10:38 AM

We also thank Vice President Biden for his statement to a mostly black audience, saying "He'll have you back in chains." We especially appreciate the announcement from the administration that approved concentration camps and financed them.

Do you have the disease called "Negrotude"? It is said that all blacks inherited this disease - a form of leprosy.

"Drapetomania" was a supposed mental illness described by American physician Samuel A. Cartwright in 1851 that caused black slaves to flee captivity.

Quarantine in camps may be necessary to preclude spread of these "diseases."

Did this article cause helicopters circling now? Be careful. Many people in this area have "Negrotude" and my "Drapetomania" (desire to flee slavery) may be contagious. I hope it is. Many people can be saved from slavery if they know they are considered slaves (Harriet Tubman).

Well, we heard from the U.S. Supreme Court what we should have learned months ago when Justice Scalia warned us about Americans going to concentration camps.

To know what a people are capable of, watch how they treat their most vulnerable citizens, the mentally ill.

Wars and rumors of wars, strange events in the heavenlies, the reunion of Jews in their original homeland, earthquakes in diverse places, governments growing more repressive . . . The Bible says when all these things begin to happen, look up and know your redemption is near. Are you ready?