There was a time when I thought we could negotiate a confidential settlement regarding the secret arrest and wrongful death of Larry Neal. I assumed the government and The Cochran Firm would not want it known that a mentally ill heart patient who was a U.S. citizen was killed and his survivors were defrauded by a law firm carrying Johnnie Cochran's name. We initially believed Larry's death was accidental. Not only was Larry Neal's death NOT accidental, but authorities do not seem to mind if the whole world knows that mentally and physically disabled Americans are secretly jailed and killed and that such deaths are covered up. It happens regularly. Apparently, it happened to Jerome Murdough.

Jerome Murdough was a 56-year-old mentally challenged veteran who was BAKED to death in Riker's Island in February 2014, but his family was not told for weeks. Finally, AP notified Murdough's family, not prison authorities or his attorney. The prison reportedly informed Murdough's state-appointed attorney three days after his demise. Perhaps officials and the lawyer had agreed that Murdough's family must never to be told about their relative slow-roasting to death in a Riker's Island prison cell.

Like Larry Neal, Jerome Murdough had suffered numerous previous arrests due to his mental illness before his fatal incarceration. It is likely that officials had contact information for Murdough's relatives in his file. But officials withhold information about mentally ill citizens' deaths sometimes to spare themselves bad publicity and save money on wrongful death lawsuits. That is why AIMI recommends that families physically search jails when looking for missing loved ones. Merely calling authorities and filing a missing person report are insufficient, as police lied when Larry Neal was "missing" for 18 days in 2003. He was secretly incarcerated throughout that time. Larry died in Memphis Shelby County Jail, deprived of his heart medications and likely because of other inexcusable abuses of power. The Neals were NEVER told the circumstances of Larry Neal's death, and we are censored and persecuted for asking.

If not for AP contacting Murdough's relatives, Murdough might have been "missing" forever and presumed dead. That was the likely plan. If only The Cochran Firm had not pretended (under contract) to handle Larry Neal's wrongful death and negligence civil actions, the Neals would have contacted media companies much sooner than WE DID to notify the public about Larry's secret murder. The Cochran Firm swore us to silence immediately regarding Larry's death, which we did not recognize at the time as being a coldblooded, premeditated murder. By the time we discovered The Cochran Firm had secretly withheld our lawsuits while Tennessee's statute of limitations ran, nearly a year had passed, and mainstream media had obviously agreed to withhold reports about the "wrongful death of Larry Neal" (Google it). That is still the case today. As odd as it seems, Murdough's mom and sister (pictured below) are lucky. They do not have to investigate and report Murdough's death themselves. See links to reports about Jerome Murdough by AP and Mother Jones. 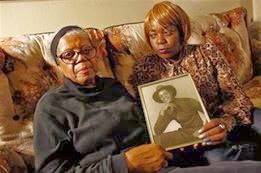 (1) The United States operate 1,800 prisons and 3,000 jails. Like Alcatraz, they aren't about rehabilitation. They're about punishment.

(3) As many as half of all sexual assaults in prisons are carried out by prison guards.

(5) We have 2.3 million Americans behind bars . . . they’re held at ADX Florence, Pelican Bay, and Rikers Island, where an inmate recently baked to death in his cell. Baked to death.

Rikers Island is the nation’s second-largest jail system with 12,000 inmates. A whopping 40 percent are mentally ill, and a third of them suffer from serious mental problems.

*****
Jerome Murdough was arrested after seeking shelter from harsh weather in New York in February. The meds he was administered for bipolar disorder and schizophrenia made the former Marine more susceptible to heat. One can only hope that Murdough was asleep as he slow-roasted in a solitary jail cell at Riker's.

Condolences to Murdough's family and close friends. Hundreds of thousands of people of all races and ages who were labeled as being mentally ill were roasted in Nazi ovens before WWII. Our apologies for taking so long to decriminalize mental illness in the USA and give Assistance to the Incarcerated Mentally Ill. Our messages to the public and politicians are censored. Human rights advocates at AIMI hope that more care is applied in the future to ensure the safety of America's most vulnerable citizens and that victims and survivors are given due process instead of cover-ups when the system fails.


Citizen: One who by birth or naturalization owes a debt of loyalty to a country and is due protection BY that country (certain exemptions apply). Murdough showed his loyalty to the USA by enlisting in the military, but his protection as a homeless veteran was missing in action. Larry's family shows loyalty by enlisting in military service and paying taxes; however, we were told by federal court order that whatever was done to prevent lawsuit against Shelby County Jail was "immaterial." Certain exemptions apply no matter who is in the White House or over the Justice Department. 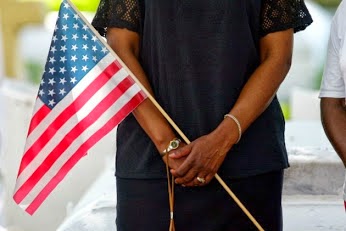 Paragraph 1 repeated: There was a time when I thought we could negotiate a confidential settlement regarding the secret arrest and wrongful death of Larry Neal. I assumed the government and The Cochran Firm would not want it known that a mentally ill heart patient who was a U.S. citizen was killed and his survivors were defrauded by a law firm carrying Johnnie Cochran's name. We initially believed Larry's death was accidental. Not only was Larry Neal's death NOT accidental, but authorities do not seem to mind if the whole world knows that mentally and physically disabled Americans are secretly jailed and killed and that such deaths are covered up. It happens regularly. Apparently, it happened to Jerome Murdough.

It would be illegal to keep a dog in a tight space 23 hours a day and gas or Taser him for barking. It would be illegal to put a dog into a deadly restraint chair for control. But this happens to mentally ill Americans routinely in the nation's jails and prisons. What happened to Larry Neal?

Cochran Firm frauds, don't even THINK about "representing" Murdough's survivors in a wrongful death civil action. Whatever other attorney handles this case, good luck. Know that I will be watching you. Every day.

While writing and publishing this article at "FreeSpeakBlog," I received several text messages from 757.254.4309 saying,

Check out my photo on Tango http://tango.net/r/pic

I knew the message was from stalkers, but I called the number. A Caucasian man answered the phone and said his phone was hacked and sending out Tango messages to a thousand people. He claimed that he just sent me a message to let us know. I told him I did not receive his message explaining that. He said, "Well, I must have sent it to somebody else."

Who believes that anyone would attempt to send an explanation to a thousand people about their phone being hacked? Stalkers know lots about programming computers, but they have no common sense. Neither do the people for whom they work.

Well, blow me down with a feather! The Cochran Firm frauds represents the family of Murdough and requested $25 million on their behalf.

Whatever The Cochran Firm frauds do to Jerome Murdough's family and to Chavis Carter's family is the fault of black bougie media owners and CoIntelPro agents who enlist The Cochran Firm to defraud families in police-involved deaths.

I do not expect either of these cases to go before a jury. A settlement will be arranged between the survivors and the government defendants. We will see the outcome.

Murdough was a mentally challenged black man like Larry Neal was. The Cochran Firm completely defrauded my family, but Murdough's death by BAKING has already gotten national news. We will see how this is resolved.