Joseph Jason Fights for His Son 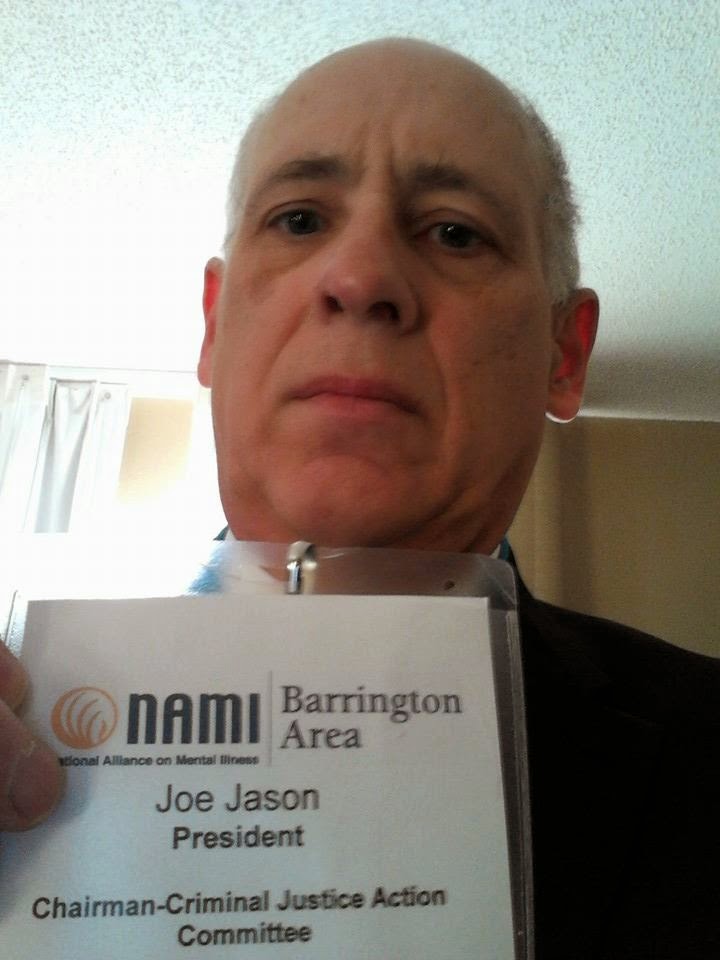 Mr. Joseph Jason
National Alliance on Mental Illness (NAMI)
Criminal Justice Advocacy for the Mentally Ill - Board Member
Re: Cyberstalking Charges for Your Mentally Ill Son, who has Asperger Syndrome

I am deeply sorry that your sick son was given a 45-year-sentence for writing two emails and making a few phone calls that frightened the recipient. You are absolutely right to assert that his sentence is because of his mental illness. It is usual and customary to overly sentence mentally ill Americans. We fight to decriminalize mental illness at AIMI, but I find your son's case particularly compelling.

Joseph, I have been victimized by cyberstalkers and in-person harassment since 2008. I have sought help from the local police department, the FBI, CIA, Homeland Security, the U.S. Attorney's Office, the USDOJ, attorneys, as well as civil and human rights organizations. Proof is not the issue. I have uploaded cyberstalking films at YouTube, and I delivered discs full of cyberstalking evidence to many of the parties named above and to media companies. My computer security system has even caught the IP addresses of some of my cyber stalkers, but no officials will acknowledge my right to exercise free speech and freedom of press without being terrorized and harassed.

Some of the online terrorism included turning the "www." in my Care2 links into the word "primate," and making my links lead to the photo of a huge, black gorilla. At Yahoo Mail, I was forced to look at a homeless, diseased dog each and every time I worked there. This was intended to mock my poem "Dog Justice for Mentally Ill." At Care2, I was subjected to continuous terrorism, including a coffin ad and an empty lethal injection table with my name underneath it. I sent the lethal injection bed marked "Mary Neal" to United States District Court during our lawsuit against The Cochran Firm, but Judge Batten said nothing about my constant terrorism.

I am followed all over the Internet by stalkers who censor what I type as I publish. They sometimes add invisible codes after my links to prevent my readers from reaching the targeted data. Sometimes when family members visit from out of town, the stalkers take control of my computer and show a picture of the type vehicle they drove in fatal accidents. In fact, twice when I published articles they did not want published, a close family member was immediately involved in a hit-and-run accident. One of the most frightening cyber terrorism pictures was grown men holding little children's heads in toilet bowls and flushing.

Detective Miller, of DeKalb County Police Department, said they would do zero about my cyber terror and in-person stalking. She said those are not crimes. Much more has happened since I started advocacy to decriminalize mental illness - horrifying things that are so disturbing that I hate thinking about what my family and I endure.

I could not sleep tonight after reading the two messages you published that your son wrote. You say they will cause him to spend 30 years of his life behind bars. I find it outrageous that your son must spend 45 years under the supervision of such people as those who have terrorized and followed me online and in person without any accountability for six years. Your son's two phone messages were:

Message #1:  “This message is for Cynthia Courter. My name is Fred Thomas. I’ve been sending you emails (to an account that you do not use anymore) and would like you to respond back to me. If you can’t respond back to me, I really hope that I don’t have to send your office some really, I don’t know - embarrassing information, perhaps. So if you can just write back to me and answer my questions that I’ve asked for you, I’d really appreciate it. Bye.”

Message #2: “Yeah, Cynthia Courter, you need to text message me or us email me or seething cause I’m really getting angry and I’m going to tell your employer all your dirty information, all your secrets, and if you think you’re going to be really embarrassed you should respond back to me. Bye.”

Sometimes when I publish an article the stalkers find objectionable, they ring my phone and an angry female voice screams at me in either Chinese or Spanish. Other times, they play ads for home security companies, etc. Their terrorism is hateful and illegal, but nobody will make them stop.

Do you want to know what the cyberstalkers sent to my mother's phone, Joseph? They sent pictures of their penises one night when I told them theirs must be small to enjoy terrorizing older women like my mother and myself. Compare that to the messages your son left. Stalkers followed my grandson and me six miles and waylaid us at the neighborhood Chevron station for over an hour one night while we waiting on 911 emergency responders who never came. I later learned that police have no constitutional obligation to protect citizens. No police responded to our 911 call or gave any explanation whatsoever until we contacted our congressman and senator. That was one of numerous instances when we were followed. I finally had to give up driving, Joseph.

Joseph, your son is obviously being persecuted for his mental illness and Asperger Syndrome, because I was told cyber terror is not a crime when I complained. Of course, one must consider that my elderly mother and I are African Americans. Perhaps that is why terrorists are allowed to interfere with our phone calls, emails, radio shows, and articles. We dared to ask, "What happened to Larry Neal?" That was my brother who had paranoid schizophrenia and was murdered while under secret arrest in Memphis Shelby County Jail in 2003. Trying to get justice for Larry Neal and decriminalize mental illness for 1.25 million other Americans brought the wrath of prison investors in government against us, Joseph.

If it were not so late, I would link some examples of my cyber terror and audio recordings of my telephone denying me the right to make a call (they play a Verizon message). There are times when I find it easier to write about these horrible crimes - my illegal imprisonment. You can see some samples online. Google "Mary Neal cyberstalking" or "Mary Neal CoIntelPro." Lots of samples are in my "Justice Gagged" blog at http://JusticeGagged.blogspot.com .

I am glad you are appealing your son's case. Please feel free to use my letter and evidence at my blogs and on films at http://www.YouTube.com/jkempp703  I have many more videos, also. I don't know how I will be punished for writing to you, Joseph. Police actually came to my home and threatened me never to tell people about the crimes we endure. Atlanta police threatened me with Tasering and arrest for talking to people about The Cochran Firm fraud against African Americans and my brother's secret lynching.

I shared your video at http://youtu.be/3KuZYUF9HvU
May God bless you, your son, and all families experiencing mental health crisis. Unfortunately, the greatest crises for families with mentally ill members come the injustice system itself, which seems determined to use our mentally dysfunctional relatives to boost prison profits.


Joseph Jason speaks for his son and others.
Posted by MaryLovesJustice Neal at 6:03 AM