Before we get into the next article, I have a question: What happens when you try to "follow this blog"? I have had 103 followers for months now and find that strange. Please try it or ask a friend to try it if you already follow, and try to tell me what happens. Thanks. Here is news about a heroic man, Rev. Pinkney: 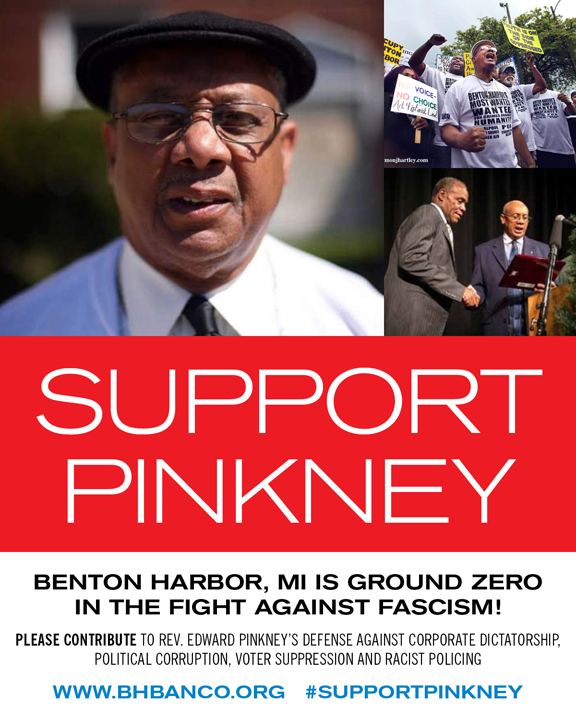 Rev. Edward Pinkney was falsely accused of voter fraud in connection with a recall petition for Benton Harbor, Michigan's mayor. At his hearing on May 30, the prosecutor reportedly admitted that he had no evidence against Rev. Pinkney, but he was bound over to court, anyway. Trial was originally set for June, but the prosecutor asked for a delay until September, and the court granted that request. Now trial was scheduled for October 27. We are preparing for court to fight these false charges that are intended to intimidate and persecute a leader who fights for freedom and justice for all people without regard to race, socioeconomic status, or where they live. You are invited to share in the battle to keep Rev. Pinkney free to continue his work.

We still need 100 good people to donate $10 each to BANCO's Legal Defense Fund. Rev. Edward Pinkney, the director of BANCO, will go on trial in September for voter fraud in connection with a petition to recall the mayor of Benton Harbor. Voters who signed the recall petition did so because they believe the new mayor works for corporate interests against the will of the people. Rev. Pinkney and BANCO truly need local, national, and international support.

You can help rectify the injustices in Benton Harbor, particularly against BANCO leader Rev. Pinkney, as the people fight alongside local and statewide residents to promote economic and social justice in Michigan. Please make a contribution to the BANCO Legal Defense Fund so we can "Free Rev. Pinkney!"

Use the "Make a Donation" button on the BANCO home page PayPal at http://www.bhbanco.org, or mail your check or money order to:  BANCO, 1940 Union St, Benton Harbor, MI 49022

1) Support the right of Benton Harbor citizens to protect themselves against a corrupt political and judicial system;

2) Free Rev. Pinkney, who was indicted on false charges. Prevent him from becoming a political prisoner again;

3) Defend free speech and freedom of press. Rev. Pinkney's prosecution is partly because he is one of the most influential men in the nation and takes a stance against tyranny and aggression. He was America's first citizen who was restricted by court order from using the Internet. Ms. Pinkney, who was not facing any criminal charges whatsoever, was not allowed to use the Internet in the couple's home. These restrictions were lifted on May 30 after public outcry;

4) Fund the appeal to have Rev. Pinkney's erroneous indictment heard before a higher court;

5) Defend the right of Benton Harbor residents to speak out against injustice without intimidation and reprisals;

6) Stop the disenfranchisement of Benton Harbor voters (a valid recall election must not be overturned);

7) Support BANCO's fight against brutality and harassment by police; support the preservation of public lands;

8) Improve living conditions in a community with 90% unemployment and under-employment (material aid is needed);

9) Challenge economic and racial apartheid in the U.S. today;

10) Help spread the word as we join others who call for justice in Benton Harbor and throughout the world. Together we can make a difference!

Rev. Pinkney is persecuted because he leads a protest against the corporate takeover of public lands in Benton Harbor area. See an excerpt from BANCO.org:

Whirlpool Vice President Jeff Noel told U. of Mich. business school students and faculty that if you want poor peoples' land, and have justice groups "on your back," simply bring in Habitat for Humanity to build a few houses and donate some appliances. Part of the land he and his corporate partners wanted was deeded in perpetuity to the citizens of Benton Harbor in 1917 by John Klock, a land owner who's infant daughter died. In a town ceremony, Klock spoke of people who owned no land but would always have this park, and named it after his infant daughter: Jean Klock Park. The largest appliance manufacturer in the world, which has outsourced most of it's jobs leaving Benton Harbor in dire poverty, has enough lawyers to get around the minor inconvenience of a deed.

In a video no longer accessible on the web, former Whirlpool CEO Dave Whitwam stated that this is the last and largest piece (530 acres) of prime real estate along the Lake Michigan shoreline. (Parkland is real estate?) Whirlpool is busy inventing terminology to justify their takeover. An example: They call this the first ever "Master Planned Community." It will have a town center with retail shops and restaurants. (Are they replacing Benton Harbor with a new town?) Deeded parkland for the people is becoming a posh enclave for the wealthy.

A stretch of the most pristine, natural beach front is to be no more. Ever. One protester said that people who grew up in this area and love the land and lake feel like an arm is being cut off.

Judges keep ruling in favor of Whirlpool in cases brought by preservationists.

*******
Benton Harbor is approximately 95 percent African American, and its "twin" city St. Joseph is approximately 95 percent Caucasian. There is no other place where apartheid in America is as evident as it is in the Benton Harbor, Michigan area. Please help Rev. Pinkney and BANCO.org fight against police brutality and corporate government corruption. As Rev. Pinkney says, "The battle is not black against white; it is elitists against everybody else. We must unite to fight this battle together." It's usual and ordinary to use the criminal justice system to terrorize and incarcerate the people's leaders. Stand with BANCO.org and say:

"Not this time, not this man, not on our watch."


Feel free to call Rev. Pinkney at (269) 925-0001. Comment on air at Rev. Pinkney's Blogtalkradio show Sundays from 5pm - 7pm EDT at (347)994-3644. Web address http://www.blogtalkradio.com/rev-pinkney
Use the hashtag #SupportPinkney whenever you post in social media. Please give generously to the legal fund at http://www.bhbanco.org and share this call to action!


*******
SEND YOUR ANNOUNCEMENTS FOR FREE PUBLICATION
Send your community service announcements to the MaryLovesJustice@gmail.com email address in order to be considered for publication in this "Human Rights Events by MaryLovesJustice" blog. Political and Christian announcements are usually welcome. If you do not receive a confirmation within 48 hours, please re-send the announcement, and call Mary Neal at 678.531.0262 or my Google Voice (571) 335-1741 .
Posted by MaryLovesJustice Neal at 12:00 AM