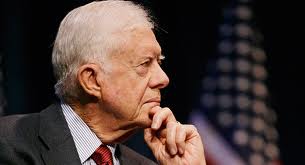 A CRUEL AND UNUSUAL RECORD - June 24, 2012: The United States is abandoning its role as the global champion of human rights. Revelations that top officials are targeting people to be assassinated abroad, including American citizens, are only the most recent, disturbing proof of how far our nation’s violation of human rights has extended . . . In addition to American citizens’ being targeted for assassination or indefinite detention, recent laws have canceled the restraints in the Foreign Intelligence Surveillance Act of 1978 to allow UNPRECEDENTED VIOLATIONS OF OUR RIGHTS to privacy through warrantless wiretapping and government mining of our electronic communications. Popular state laws permit detaining individuals because of their appearance, WHERE THEY WORSHIP or with whom they associate. (See Carter's entire statement at this New York Times link http://www.nytimes.com/2012/06/25/opinion/americas-shameful-human-rights-record.html  . If they will not let you use the link, please Google the title.)
.
Some world leaders find America's stance on human rights so egregious that they feel President Obama's Peace Prize should be revoked. "Obama Nobel Peace Prize [Repeal] Sought By Bolivian President and Russian Lawmaker" is at this link  http://www.huffingtonpost.com/2011/03/23/obama-nobel-peace-prize-revoked_n_839310.html  (Google the title if stalkers attack the link, please.)

Beware, sincere human rights activists and real Christians! Do-ers of the Word are necessarily at odds with victimizing people, as evidenced by Matthew 25:40, Hebrews 13:3, Psalm 102:19-20. Good boys, good girls, whatcha gonna do when they come for you? The time is at hand when obeying the government may mean disobeying Christ. "Choose this day whom you will serve" (Joshua 24:15). People may have less time to decide where they stand than they think. My next article in FreeSpeakBlog reports that the president has issued an executive order seizing certain Russian assets and placing the USA in a state of National Emergency http://freespeakblog.blogspot.com/2012/06/national-emergency-declared-russian.html . If stalkers attack the link, just browse to the next article in FreeSpeakBlog or Google, "Executive Order Russia."

Humanitarians and Christians are being put in a position to choose sides. Laws were passed in some states to prevent feeding the homeless in defiance of God's law, wherein we are admonished to give to every man who asks for help and to love others as we love ourselves. Promoting peace like Jesus and criticizing wars without provocation are perceived by some officials as treason. I am censored and terrorized for asking for government records and accountability about my mentally, physically disabled brother's murder, which happened while he was under secret arrest in 2003 in Memphis Shelby County Jail. The jail was under overview by the United States Department of Justice at the time, and that federal agency helped to cover-up his death, denies our family access to records and due process of law. So what chance of justice do disabled people and minorities really have? See WRONGFUL DEATH OF LARRY NEAL http://wrongfuldeathoflarryneal.com/   Peaceful people are actually being placed on "watch lists," and thousands of Americans claim they became victims of harassment programs (organized gangstalking) because they advocate justice and peace.

This writer uses the Internet to advocate for victims of judicial and government corruption. However, it is challenging to do that because censorship is rampant and will worsen if/when CISPA or another Internet censorship bill passes. Right now, censorship is done covertly, and police refuse to apply legal remedy. For instance, cyberstalkers are paid to prevent or reduce exposure to news about mentally disabled people who are abused or were killed like my brother. Members have trouble posting and strands of discussion are deleted at our online advocacy group, Assistance to the Incarcerated Mentally Ill. You help us to overcome censorship whenever you read and share articles about the decline of human rights in this FreeSpeakBlog and other blogs by Mary Neal, a/k/a "MaryLovesJustice." Thanks for your interest and support.

We admire and appreciate former President Jimmy Carter and all others who speak truth to power because of their love for America. The United States will never really honor the Universal Declaration of Human Rights and become the great nation she can be if we ignore gross violations and pretend that all is well. Let's get real.
Posted by MaryLovesJustice Neal at 9:17 PM