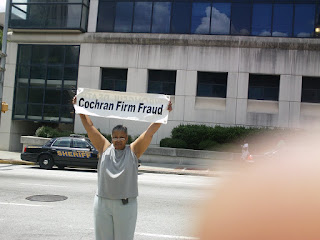 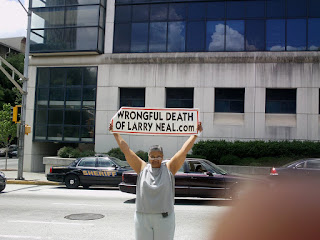 Mary Neal pickets Georgia Superior Court on May 25, 2010, regarding Cochran Firm fraud
The (Johnnie) Cochran Firm disclaimed it had a Georgia office and Judge Shoob ruled the Neal's lawsuit was therefore wrongly served in the lawsuit regarding The Cochran Firm defrauding the Neal family after Larry's wrongful death. Picketing for injustice to hide the secret arrest and wrongful death of Larry Neal will continue throughout spring and summer 2010 at courthouses and media in Atlanta and at USDOJ headquarters in Washington.  (The media censors The Cochran Firm fraud: perjury in court or false advertising.  The DOJ participates in Larry Neal's murder cover-up). See http://wrongfuldeathoflarryneal.com/ - See my cyberterror and online censorship videos at YouTube http://www.youtube.com/results?search_query=jkempp703&aq=f

Beginning Tuesday, May 25, 2010, I plan to STAND FOR JUSTICE in front of Fulton County Georgia Superior Court from 2:00 p.m. until 4:00 p.m.  I plan to continue to do that on a weekly basis each Monday throughout spring and summer 2010, except the week (to be announced) when I plan to go to Washington, D.C. to STAND FOR JUSTICE in all day every day in front of the unrighteous United States Department of Justice.  This week I am one day late and will begin on Tuesday.  Peaceful persons who demand change in the unjust justice system and wish to stand with me are welcome to join me.  Approximately 1 in 30 Americans are currently imprisoned or face the threat of incarceration as probationers and parolees.  Over 2/3 of them are imprisoned for non-violent offenses.  Approximately 1 in 9 African American males between the ages of 18 and 34 are prisoners.  I especially invite family members of the 1.25 million mentally ill inmates who are wrongly imprisoned in America rather than treated in their communities or in mental hospitals, depending on their mental states and offenses.  I protest slavery being moved from America's plantations to its prison system.  I protest prison profiteering, unrighteous judges, nation-wide cointelpro law firms (The (Johnnie) Cochran Firm), the death pentalty, excessive sentencing, wrongful convictions, trying and sentencing children as adults, prisoner torture and murders, police brutality, denial of justice to poor and minority families, and other human rights offenses regularly practiced in, through, and by the United States "justice" system. My sign says "WRONGFUL DEATH OF LARRY NEAL" on the front and "COCHRAN FIRM FRAUD" on the back.  Anyone who is interested or who becomes interested in joining me over the spring and summer should bring nonviolent descriptive signs without profanity that convey they are fed up enough to stand up.
I protest being stalked online and in person and having six computer systems destroyed because illegal, mercenary canines in government and others wish to hide my handicapped brother's murder by police and The Cochran Firm Fraud. I protest being censored in a country where my male relatives fight and have fought for freedom of speech and freedom of press and other democratic ideals. I will not watch mutely while Liberty goes quietly into her goodnight.

In Nazi Germany, the mentally ill
Were the first to go
It still seems a good starting place
Any reason to change it?  No.

We take over your computers
And control your telephones
To limit the number of people you tell
Their civil rights are gone.

OpenCongress.org re H.R.619 to resume Medicaid for mental hospital insurance (as opposed to imprisoning people for being sick) http://www.opencongress.org/bill/111-h619/show

Swine Flu Martial Law Bill - Massachusetts  - "Take the swine flu shot or go to a FEMA center" http://www.mass.gov/legis/bills/senate/186/st02/st02028.htm and
http://www.infowars.com/swine-flu-martial-law-bill-clears-massachusetts-senate/
People have become properties of the government to arrest or murder at will - poor and minorities first.

War on Drugs links:  Statistics, links to government and academic studies, and other data regarding the War on Drugs are available in the website at the link below: Drugstory.org (hard facts, real stories, informed experts) http://www.drugstory.org/drug_stats/crime_statistics.asp#drugarrests

Unneeded Prison in Nevada Eludes Budget Ax
http://www.pewcenteronthestates.org/news_room_detail.aspx?id=57845
(The empty Nevada prison might be intended as a FEMA center to hold people like me who refuse to accept H1N1 vaccines that are pronounced "safe," yet the government, drug manufacturers, and administering medical personnel have all been excluded from liability for deaths and injuries the drug could cause)