Photo Album for Assistance to the Incarcerated Mentally Ill (AIMI) 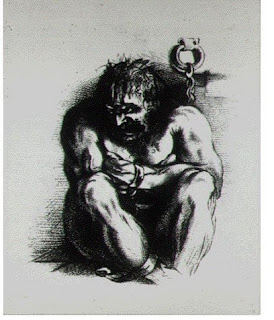 Pictured is a naked, chained and shackled mentally ill prisoner, a photograph from the album of Assistance to the Incarcerated Mentally Ill (AIMI), a/k/a The Dorothea Dix Group.  AIMI uses 400 pictures in the album at the link below in advocacy against incarcerating the mentally ill, excessive sentencing, wrongful convictions, and the death penalty.  The man pictured above is chained to a prison wall, naked and neglected. His hair is matted and unkept, and his skin is diseased from lack of baths. Unfortunately, such cruel methods of dealing with psychiatric patients are still employed in 21st century America's prisons and jails.

Two recent abuse cases gained widespread attention.  Mr. Gay is currently suing his Illinois prison pyschiatrist for abuse he endured in 2004.  Gay alleges that the doctor had him repeatedly restrained naked on a cold metal bed frame for up to 32 hours in isolation while deprived of food. Frank Horton, a former inmate at Nashville's CCA correctional facility, was kept naked in dark solitary confinement for nine months, living in feces without baths, exercise, or doctor's visits.  A guard rescued Horton by blowing the whistle on his employer to save the inmate's life.  The mentally ill are often arrested for minor offenses like vagrancy and disturbing the peace.  Once imprisoned, they are frequently abused by other inmates and guards.  Some die like Sean LeVert, a famous singer who was secured in a dangerous restraint chair, and like my brother, Larry Neal.  His jail death is covered-up, and the exact circumstances of his demise were not revealed despite open disclosure laws. (Browse online for his name and story, or see other articles in this blog.)
.
Approximately half of the nation's 2.3 million inmates are mental patients, including 60% of those in solitary confinement.  Pictures in AIMI's album are used to say:
.
JAIL IS THE LAST THING THAT MENTAL PATIENTS NEED, AND TOO OFTEN, IT IS THE VERY LAST THING THEY EXPERIENCE. Please join our effort to decriminalize mental illness. No one deserves to be punished for having a disability. Repeal capital punishment; stop excessive sentencing and wrongful convictions. Respect human and civil rights. Equal justice!
.
When visitors open the album at Care2, they are give the option to view the 400 photos using a slideshow.  However, some of the pictures are censored and will not present on the slideshow.  The slideshow starts to race rather than present each photo on the five-second delay that is set, and certain pictures repeat rather than show the next photo due. Therefore, the pictures are best viewed six at a time by using the page view and the arrows at the bottom of each page to access the next six photos.  Enjoy, and please share the link. You can use the convenient ADD THIS button at the upper left-hand side of this page to send the album to friends, groups, Facebook, etc.  Return to this blog and give your opinion, if you wish, in the comments section.
.
Elected officials are urged to remember that whereas acute mental patients usually are not voters, their family members are.  Each of the 1.25 million mentally ill incarcerees in America probably has at least four people who care about them and recognize that their loved ones should not be punished for having a common, treatable health condition.  This also happens to veterans suffering PTSD.  With the lack of available treatment for mental illness in American communities, especially for the uninsured, it is common for the mentally ill to try to self-medicate with alcohol and street drugs, and that causes numerous arrests.  Support H.R. 619 for Medicaid insurance to again become available for inpatient psychiatric treatment.  It costs taxpayers significantly less to help provide treatment for their mentally ill neighbors than it does to imprison them.  In addition to being just and humane, treatment reduces crimes.
.
Once patients have been stabilized by inpatient care, they should only be released from hospitals (or prisons) under assisted outpatient treatment programs that combine mandatory treatment and subsistence assistance.  Kendra's Law program participants in New York experienced around 90% decrease in hospitalization, incarceration, and homelessness compared to their circumstances prior to program participation.
.
*Link to AIMI album: http://www.care2.com/c2c/photos/view/217/513396753/AIMI_Photo_Album/
.
Find out just what any people will quietly submit to and you have the exact measure of the injustice and wrong which will be imposed upon them. ~ Frederick Douglas.
.
More links to advocacy for the incarcerated mentally ill and other human rights/justice issues are at Mary Neal's Google profile link: www.google.com/profiles/MaryLovesJustice
.
Thanks for your interest, and please support H.R. 619.
.
Posted by MaryLovesJustice Neal at 12:08 PM