Jimmy Carter: The U.S. Is an Oligarchy

Jimmy Carter: The U.S. Is an “Oligarchy With Unlimited Political Bribery” https://theintercept.com/2015/07/30/jimmy-carter-u-s-oligarchy-unlimited-political-bribery/ 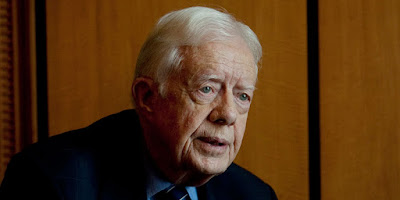 Jimmy Carter: The U.S. Is an “Oligarchy With Unlimited Political Bribery”

SOME TRUTHS DESERVE MORE THAN ONE TELLING. The government cover-up regarding the secret arrest and murder of Larry Neal and The Cochran Firm fraud evidence the truth that President Carter exposed and opposes. An "oligarchy" is a small group of people having control of a country, organization, or institution. Lawlessness reigns in America, where decision makers collude against justice for the People. The National Security Agency (NSA) has been spying on Americans' communication for over 20 years and keeping records; therefore, blackmail as well as bribery may be used to coerce officials and guarantee this nation's continued control by unscrupulous elitists.

America is a country where anyone - even physically, mentally handicapped and harmless citizens like Larry Neal - can be murdered under secret arrest without any single agency or official raising an objection. Governmental agencies as well as nongovernmental organizations are mute regarding the U.S. Department of Justice's criminality. "UNLIMITED political bribery," said President Carter. Consider (a) through (i), the players in Larry Neal's murder cover-up:
(a) police who conduct secret arrests;
(b) a medical examiner, O.C. Smith, who was later indicted for strapping dynamite to himself and implicating himself in a wrongful murder conviction that led to Phillip Workman's execution;
(c) corrupt lawyers in the CoIntelPro Cochran Firm, who contracted with the Neals regarding Larry's wrongful death case but did nothing but lie to the clients while the Tennessee statute of limitations was passing without event attempting to bring legal remedy;
(d) judges who accepted known perjury in defense of allegations against the corrupt, racist lawyers;
(e) refusal by the USDOJ to release records, information, and things related to Larry's fatal arrest;
(f) complicity by state bar associations and media companies that chose to help cover-up the murder of a lifelong mental patient and The Cochran Firm's fraud against his family;
(g) local police who joined in the conspiracy to intimidate and persecute Larry's family;
(h) denial of due process of law regarding censorship and intimidation against Mary Neal; and
(i) twelve years of complicity by silence from all governmental offices and journalists the Neals contacted, with the exception of a few independent media companies.

One might ask why all of these parties would collude to prevent justice regarding a secret jail death. Who said it was just ONE jail or police victim? In 2014, Florida reported 346 deaths among its inmates in prisons, not counting its jails and deaths by police. Consider that America has 50 states, and Florida is far from being the only one that has a high death rate among incarcerated persons and denies media presence within its correctional institutions. Even the United Nations is denied admittance to America's jails and prisons, although America is a prominent member of that international body dedicated to protecting human rights worldwide.

In 2008, high U.S. officials were indicted on allegations that they withheld federal investigations regarding deaths in custody and prisoner abuse in return for personal gain. Such a scheme to ignore deaths by police and corrections officers might conceivably be worth billions of dollars per year to racketeering government officials - an "oligarchy with unlimited political bribery." Would the scheme not be supported by the police departments it protects, judges, lawyers, and politicians, especially those who invest in private prisons and jails and accept political contributions from the prison industrial complex?

Consider all of the parties who collude to prevent justice regarding Larry Neal's murder under secret arrest, and recognize the truth of what President Carter alleged about criminal elitists. The government has been seized, and citizens have no recognized right to life, liberty, or the pursuit of happiness, whether black, white, or other. Americans cannot vote racketeers out of office because of voting fraud. We cannot recall corrupt public officials, lest we wind up imprisoned for trying, like Rev. Edward Pinkney is. We cannot even discuss our dilemma without being set upon by hackers who seize control over telephones and computers and followed by criminals who interrupt U.S. Mail that carries news about their crimes.

The seizure of America by elitist overlords cannot be resolved by people who are easily bribed or blackmailed into joining the conspiracy. We must be strongly persuaded to unite for justice and to value human rights over personal gain and despite our fear of offending the oligarchy.