Bernie Sanders for President 2016 - Believe it! 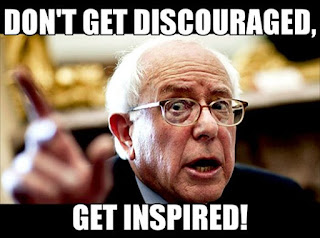 Millionaires are spending a fortune to convince Americans that popular candidates cannot win the election. Contrarily, ‪‎God‬ says a united people can have whatever we want (Gen. 11:6). Who's report will YOU believe? ‪#‎feelthebern‬ Answer during the Democratic primaries.

When our Lord came upon a crippled man who explained that he was hoping for healing, Jesus asked the crippled man,"WILL YOU BE MADE WHOLE?" (John 5:6). It is for us to decide whether we will embrace and receive our healing. We have before us a presidential candidate in Bernie Sanders who has a lifelong history of taking a courageous stance against oligarchy, which is government of, by, and for the rich. For example:

(1) Sanders joined other elected officials who entered a bill into Congress to end government contracts with private prison companies within three years: H.R.3543 - Justice Is Not for Sale Act. This bill can eliminate mass incarceration, because 2.3 million Americans are behind bars primarily for one reason - to enrich the wealthy. That is one reason why Michelle Alexander, author of "The New Jim Crow," supports Bernie Sanders for president.
(2) Sanders voted against NAFTA, which is responsible for removing over 850,000 jobs from America.
(3) Sanders would raise the minimum wage.
(4) Sanders would give free college tuition for qualified students.
(5) Sanders is for universal healthcare.
(6) Sanders voted AGAINST the Iraqi War.
(7) Sanders is against racism and always has been. He was arrested as a 21-year-old college student at Chicago Univ. for demonstrating with Blacks for better educational opportunities.
(8) Sanders is against the Trans-Pacific Partnership Agreement (TPP). TPP is expected to negatively impact U.S. workers and limit our use of Internet services. The Internet gives average Americans a voice, particularly people who mainstream media ignores.
(9) Sanders would invest sufficiently in mental health care so that treatment would replace homelessness, prison and death for our most vulnerable citizens.
(10) Sanders voted against the National Defense Authorization Act (NDAA) in October 2015. NDAA gives the White House the power to point to any person or group of persons in America, including citizens, and order their internment in concentration camps without levying any criminal charges or giving opportunity for defense - no trial. That violates the Sixth Amendment, but violations against the U.S. Constitution have become increasingly common in this New America.

Millionaires tell us that implementing Sanders' ideas would be impractical because America cannot afford for all citizens to have their basic needs met. That is a lie. Whereas We the People pay roughly 7 percent sales tax on our purchases, Wall Street exchanges trillions of dollars worth of stocks every year, including prison stocks, and pays zero sales tax. A 1 percent sales tax on Wall Street exchanges would be sufficient to pay off the national debt, and 2 percent would accomplish everything on Sanders' agenda. Keeping Americans impoverished is a decision, and reversing that is also a decision.

WE CAN HAVE A RIGHTEOUS MAN AS PRESIDENT OF THE UNITED STATES OF AMERICA. How do I know Sanders is righteous? God said, "The righteous care about justice for the poor, but the wicked have no such concern" (Proverbs 29:7). Sanders has demonstrated his concern for the downtrodden throughout his entire public life and even before that as a college student. The choice is yours. "Will you be made whole?"

News reports say that 90 percent of America's millionaires want Hillary Clinton for president, but there are only two ways for them to succeed. Elitists must either do election fraud or convince tens of millions of Americans that "business as usual" is all we can ever hope for and all that we and our children deserve.

Elitists say we must continue to accept our dreams being deferred indefinitely while bankers and other elitists prosper, while the government continues its invasive spying, while police attack citizens with military weaponry, while our jobs continue going overseas and behind bars so that elitists can capitalize on cheap labor. They say continue the "Obama legacy" while our dreams to earn living wages, buy and actually keep a home, have health care insurance, and send our children to college are dashed. The rich get richer as our resources and manpower are used to fight avoidable wars. On the other hand, it is God's will that things be well with you and that you prosper even as your soul prospers. God gave us free will. https://www.youtube.com/embed/4BcJQa71rYs/ "Who's report will you believe?" Embedded below is a choir singing this song:


Michelle Alexander​ is featured in a report: ﻿"Why Hillary Clinton Doesn’t Deserve the Black Vote. From the crime bill to welfare reform, policies Bill Clinton enacted — and Hillary Clinton supported — decimated black America." I recommend that you read it at http://www.thenation.com/article/hillary-clinton-does-not-deserve-black-peoples-votes/

Christians must never choose "the lesser of two evils." We must not participate in placing evil in power. I come to you today with a report from the Lord:

It behooves Christians to learn reasons "Why Human Rights Defenders Support Bernie Sanders for President." Please hear and share this radio broadcast http://www.blogtalkradio.com/humanrightsdemand/2016/03/14/why-human-rights-defenders-support-bernie-sanders-for-president/
The choice is ours.

MaryLovesJustice, marylovesjustice@gmail.com, (678)531-0262, director of Assistance to the Incarcerated Mentally Ill, Human Rights for Prisoners March, and the Davis-MacPhail Truth Committee; author of "The Cochran Firm Fraud" http://CochranFirmFraud.blogspot.com, "Human Rights Demand" Blogtalkradio channel http://www.blogtalkradio.com/humanrightsdemand, and Wrongful Death of Larry Neal website http://WrongfulDeathofLarryNeal.com Believe in God and in yourselves, and vote accordingly. God bless America with liberty and justice for ALL.
Posted by MaryLovesJustice Neal at 12:09 PM

The number of followers at "FreeSpeakBlog" have reduced by over 20 people lately. Some people are offended at the truth, but wise people know that "the truth will set you free." I believe most Americans are truth-lovers and that we realize that learning censored data is beneficial. Therefore, I believe that hackers have actually stolen some followers from the "FreeSpeakBlog" and prevented others from joining. Proof that human rights advocates are censored in this country will be revealed in my book, "Cochran Firm Fraud." Hypocrisy is rampant in these United States of America and always has been. People cannot change negative circumstances they do not know about, and that is the entire point of censorship.

You are invited to "follow this blog" to learn about pressing social and justice issues from this layperson's perspective. Thank you in advance for sharing this invitation and the articles at "FreeSpeakBlog" along with a link back to the source - http://FreeSpeakBlog.blogspot.com. Blessings!

There is a big "oops" message at the widget to view our schedule of shows at "Human Rights Demand" channel on Blogtalkradio showing at my "FreeSpeakBlog" today. Regardless of censorship, you should be able to access all of our radio broadcasts 24/7 from the Blogtalkradio archives at http://www.blogtalkradio.com/humanrightsdemand

We have recorded many other radio shows for your listening and sharing at "National Network in Action" channel at http://www.blogtalkradio.com/nnia1

Keep abreast of some of the shows we produce at "MaryLovesJustice Radio" blog. http://mljradio.blogspot.com/

One can judge the relevance of a message by the level of adversity against it.