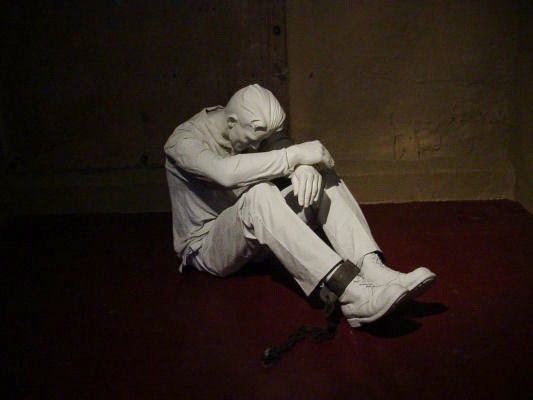 Families of mentally ill American inmates were astounded to read the headline below in Solitary Watch.com: U.S. Government Tells UN Committee on Torture: “There Is No Systematic Use of Solitary Confinement in the United States”


I published the following comment at the article:
With so many super max prisons and solitary jail/prison cells in the USA, it is surprising that the USA would deny its systemic use of solitary confinement. It is estimated that roughly 80,000 inmates are in solitary confinement, some for decades. Over 60 percent of the isolated inmates are mentally ill people who should be treated as psychiatric inpatients or outpatients, not punished for offenses that arose from their health disabilities. Assistance to the Incarcerated Mentally Ill (AIMI) plans to file an action in International Court against the USA for long-term homelessness, brutality and wrongful deaths of mentally ill Americans, especially mentally ill inmates who were denied timely psychiatric treatment to prevent offenses that led to harsh punishment. Google “AIMI vs. USA,” which will be filed in 2015. Listen to our Blogtalkradio shows on Wednesdays at 8pm Pacific Time to hear from families in mental health crises. Torturous solitary confinement and denial of visits are two of the most common complaints among family members of mentally ill inmates. [This news was discussed during our regular Wednesday radio episode of Assistance to the Incarcerated Mentally Ill at 8pm Pacific on October 15, 2015, which is archived at Blogtalkradio at
http://www.blogtalkradio.com/nnia1/2014/10/16/assistance-to-the-incarcerated-mentally-ill ]

According to Solitary Watch, the USA plans to deny systemic use of solitary confinement in its report to the United Nations and claim that American citizens are protected by the U.S. Constitution from such cruel and unusual punishment. The report says in part:
The United Nations Convention Against Torture and Other Cruel, Inhuman or Degrading Treatment or Punishment (CAT) forbids “any act by which severe pain or suffering, whether physical or mental, is intentionally inflicted on a person” for the purposes of intimidation, coercion, forced confession, or punishment, “when such pain or suffering is inflicted by or at the instigation of or with the consent or acquiescence of a public official or other person acting in an official capacity.” The United States asserts that it is in all cases in alignment with CAT. See the "protections" that Americans allegedly have:

The U.S. Constitution, along with federal and state laws, establishes standards of care to which all inmates are entitled…U.S. courts have interpreted the Eighth and Fourteenth Amendments of the U.S. Constitution as prohibiting the use of solitary confinement under certain circumstances, especially with regard to inmates with serious mental illness or for juvenile detainees. (Specifically, under the Eighth Amendment’s prohibition against “cruel and unusual punishments,” correctional facility administrators may not subject inmates to solitary confinement with deliberate indifference to the resulting serious harms, including suicides, suicide attempts, and serious self-injury. See Farmer v. Brennan, 511 U.S. 825, 843 (1970); see also, e.g., Madrid v. Gomez, 889 F. Supp. 1146, 1265 (N.D. Cal. 1995) (using prolonged solitary confinement on prisoners with serious mental illness can be “the mental equivalent of putting an asthmatic in a place with little air to breathe”) …

People with mental, physical, and psychological disabilities are not punished with solitary confinement, the U.S. report asserts:

The Americans with Disabilities Act of 1990 (ADA) and the Rehabilitation Act of 1973 (Rehabilitation Act) restrict and regulate the use of solitary confinement for persons with disabilities. Title II of the ADA, 42 U.S.C. 12132, applies to state actors, while the Rehabilitation Act applies to federal correctional facilities and correctional facilities receiving funds from the federal government. Both statutes prohibit the use of solitary confinement in a manner that discriminates on the basis of disability instead of making reasonable modifications to provide persons with disabilities access to services, programs, and activities, including mental health services. See Pa. Dep’t of Corr. v. Yeskey, 524 U.S. 206, 210 (1998).

Numerous commentators at the Solitary Watch article are incredulous over the prospect of the U.S. State Department denying the “systematic use of solitary confinement” in American prisons. Eileen Siple wrote,"In many counties in the US, including Harford County, MD, juveniles charged as adults are automatically placed in solitary within adult jails and prisons “for their own protection”. This can go on for months or years – until they are bailed out, waived down (unlikely), turn 18, or their cases go to trial. Isn’t that systematic?"


How can the State Department deny systemic use of solitary confinement and other torture against American prisoners with evidence and witnesses to the contrary? For example, "Dog Justice for Mentally Ill" blog carries numerous reports and videos documenting brutality and deaths of mentally ill victims in custody, which were also published on mainstream news broadcasts.The denial of systemic prison torture may be possible because a minute percentage of human rights complaints the United Nations receives originate in the United States. In "AIMI vs. the USA," the International Court will be presented with evidence that police and correction officers' often torture, brutalize and sometimes kill mentally ill Americans without incurring criminal charges. Cover-ups are more likely to follow such abuses and deaths. In addition, cruel and degrading treatment against prisoners frequently extends to family members and advocates who demand justice. Following the secret arrest and wrongful death of Larry Neal, this writer's disabled brother who was a lifelong schizophrenic heart patient, his family endured censorship, surveillance, and financial persecution for requesting an explanation about his kidnapping and murder in Memphis Shelby County Jail in 2003. Retaliation for exposing crimes against humanity in America's justice system is common, but human rights advocates must not be deterred. "Silence is the deadliest weapon of mass destruction." ~ Cynthia Mckinney

FIVE REFERENCES:
U.S. Government Tells UN Committee on Torture: “There Is No Systematic Use of Solitary Confinement in the United States”

http://solitarywatch.com/2014/10/14/u-s-government-tells-un-committee-on-torture-there-is-no-systematic-use-of-solitary-confinement-in-the-united-states/
Two Mississippi Inmates Are Still Awaiting Trial After 7 and 8 Years
http://breakingbrown.com/2014/04/two-mississippi-inmates-are-still-awaiting-trial-after-7-and-8-years/
Catch a Nigga by His Toe (the Kalief Browder story)
http://freespeakblog.blogspot.com/2014/10/catch-nigga-by-his-toe.html
Terrell Scott and Shannon Nyamodi: Forcing a Plea
http://dogjusticeformentallyill.blogspot.com/2013/12/terrell-scott-and-shannon-nyamodi.html
American Prisons - Worst in the World,? by Mari Maxwell, Uloop writer
http://www.uloop.com/news/view.php/117547/American-Prisons-Worst-in-the-World
A poll that was taken showed that out of 10 of the worst prisons in the world, five of them existed within the confines of the United States of America.

***********
Thank you for giving Assistance to the Incarcerated Mentally Ill.
It would be illegal to keep a dog in a tight space 23 hours a day and gas or Taser him for barking. It would be illegal to put a dog in deadly restraint for control. That happens to mentally ill people routinely in the nation's correctional facilities. What happened to Larry Neal?