Catch a Nigga by His Toe 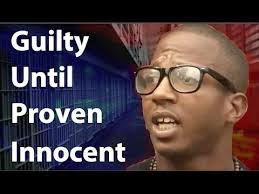 Black youths, Americans with mental disabilities, and other marginalized people in the USA are regularly detained in prisons and jails with trials denied unless they agree to plea bargain. These defendants are usually subjected to torturous solitary confinement and other abuses in order to rid them of such lofty notions as having their day in court. Certain defendants are denied their Sixth Amendment right guaranteeing a speedy, fair, public trial, with adequate representation by competent legal counsel.

Indefinite detention without trial is more likely to happen to innocent than to guilty defendants. When prosecutors do not expect to win a guilty verdict, trials are denied and defendants are strong-armed into plea bargains just to gain jail release, sometimes after many years of wrongful arrest. It appears that defense attorneys and judges are sometimes participants in conspiracies to enforce plea bargains. The Terrell Scott case in Pennsylvania and the Shannon Nyamodi case in North Carolina are two examples of indefinite detention in torturous conditions to enforce plea bargains. This illegal practice is probably a by-product of the for-profit prison system. Today we are invited to consider the Kalief Browder case with DemocracyNow.org. Please see an excerpt below:

Accused of Stealing a Backpack, High School Student Jailed for Nearly Three Years Without Trial ~ We look at the incredible story of how a 16-year-old high school sophomore from the Bronx ended up spending nearly three years locked up at the Rikers Jail in New York City after he says he was falsely accused of stealing a backpack. Kalief Browder never pleaded guilty and was never convicted. Browder maintained his innocence and requested a trial, but was only offered plea deals while the trial was repeatedly delayed. Near the end of his time in jail, the judge offered to sentence him to time served if he entered a guilty plea, and warned him he could face 15 years in prison if he was convicted. But Browder still refused to accept the deal, and was only released when the case was dismissed. During this time, Browder spent nearly 800 days in solitary confinement, a juvenile imprisonment practice that the New York Department of Corrections has now banned.
[See a video and continue reading about Kalief Browder at this DemocracyNow.org link
http://www.democracynow.org/2014/10/1/accused_of_stealing_a_backpack_high ]

Posted by MaryLovesJustice Neal at 2:58 PM