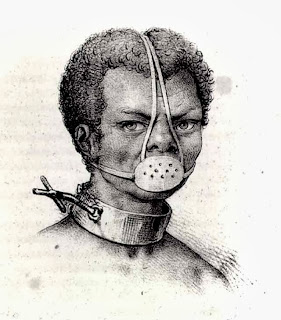 The picture above shows how oppressors want me to be - in an iron yoke, chained and gagged. But that is not fear and compliance in the captured woman's eyes. "We are troubled on every side, yet not distressed; we are perplexed, but not in despair; Persecuted, but not forsaken; cast down, but not destroyed!" 2 Cor.4:8-9.

Eighteen(18) links, two photos, one embedded video are in this article. 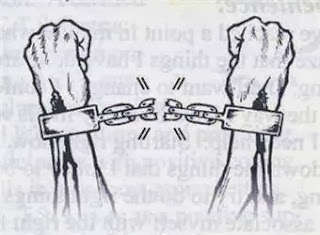 As Rev. Martin Luther King, Jr. so eloquently said when he was warned about opposing the Vietnam War, "I'm Sorry Sir, You Don't Know Me." I encounter a great deal of opposition publishing articles to expose my mentally, physically disabled brother's murder under secret arrest. It is treated like a national secret. I have lived under threat to expose how mentally challenged Americans are treated like subhuman commodities on Wall Street, as 1.25 million of them are presently incarcerated. Cyberstalkers working for powerful forces censor my articles that oppose mass incarceration and crimes against humanity. The cyber stalking around prisoner issues is most intense when I publish anti-DP articles.

Probably because I am a black female who lacks wealth, oppressors thought I would lose my resolve when gangstalked - followed by numerous cars during every road trip I made. They believed that flying helicopters over my rooftop that stood still there for roughly 30 minutes was the key to success. They even arrested several young men from my family. One was arrested simply for answering a question directed to him as a juror candidate. The prosecutor asked if he had any reason why he should not be chosen for the jury, and he responded, "Yes. I cannot in good conscience send another black man to jail." The judge ruled he was in contempt of court and jailed him overnight. Yet, concerning the CoIntelPro agent who falsely presented herself as a nurse from my mother's home health care service and sexually assaulted her on her hospital bed, the DeKalb County detective said that was not criminal conduct.

CoIntelPro agents surround me, including The Cochran Firm, a CoIntelPro law firm that contracted with my family to be Larry Neal's wrongful death attorneys but colluded with Shelby County Jail and government officials to hide Larry's murder. Burglars were sent to my home to remove the court records and evidence from two lawsuits I filed against that unethical law firm. The injustice system wants to do all of these things to me, but in silence. By this time, I was supposed to look like the slave woman in the first photo above - collared, chained and gagged. I stayed in my house for a year and a half when I discovered the police were in agreement with my suppression - I received no response to a 911 emergency call when stalkers followed me for six miles and waylaid me at the neighborhood Chevron station on September 27, 2008 - the day after I published an article saying that videos would expose The (Johnnie) Cochran Firm fraud. That is my term for the elaborate government cover-up regarding Larry's death.

The criminals want peace without justice. As Rev. Martin Luther King, Jr. told oppressors roughly 50 years ago, that just is not possible. Racists in high positions use financial persecution, intimidation, and do actual harm to people in America, particularly black people, in order to control them. They encounter great success with many targets. That is why they thought the tactics would work to make me censor myself like sold-out American media companies. Prison investors hate my advocacy against prisoner cruelty, capital punishment and mass incarceration, especially advocacy for mentally ill people, who are the backbone of the prison industrial complex. They seek to exhalt themselves above God Himself, who told said in Proverbs31:8-9 to speak for the poor and oppressed and all who are appointed to destruction. Therefore, I repeat to oppressors what Dr. King told them a half-century ago (his words were captured on the video embedded below): "I'm Sorry Sir, You Don't Know Me."
YouTube link
http://youtu.be/RvymnF-_Pf8

There is no slavery unless BOTH parties (the intended slave and potential owner) acknowledge a master. "Sign your own emancipation proclamation" (MLK).

Note: If any of the eighteen (18) links herein fail, please Google the title or copy/paste the link into your search field. Comment on YOUR censorship below. As Frederick Douglass said, "Censorship is a double wrong." It is your right to read what I publish, just as it was my right to publish it. Also email the United States Department of Justice at AskDOJ@usdoj.gov.

As I study the artist's rendition of the captured woman above, I understand why captured Africans cast their eyes downward when in the presence of their oppressors.

Posted by MaryLovesJustice Neal at 9:00 PM

Google, I don't know why, but the censorship force is desperate to open a field near my Google+ link to steal it. The way they do it is by pulling the data they wish to hide into a field that renders it invisible online. My theory is that they attack my Google+ link most because you censor less than other online services. Thanks for being you, Google. Blessings.

Google, I removed the first AdSense ad fields from my Exposed blog and my DogJusticeforMentallyIll blog because I grow weary of their attempts to intimidate me through advertising. I was tired of it before coming to Google from Yahoo. At Yahoo, I only saw a starving, diseased dog, which they used to harass me about my censored poem, "Dog Justice." At Care2, I only saw the colorful balls and the word "BOOM!" (I posted the video at my YouTube channel jkempp703). Threatening ads are intended to scare me and make me give up on justice. As MLK said, "I'm sorry, sir. You don't know me."

I write about people victimized in and by the injustice system. I expect lawyer ads, ads for mental health care, ads about civil and human rights, and ads for computer equipment and security systems, etc. I thought AdSense would match APPROPRIATE ads to my articles. I see such ads at other sites, so I know you have those customers. I shall shortly go after my own advertisers, because I feel the cyber stalkers have control of AdSense. Blessings.