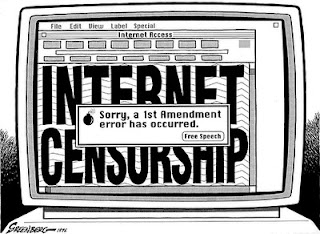 I knew something was happening! (Twenty-two(22) links are in this article.) I have experienced almost net freedom at Facebook today, and I am America's most censored person. The prez is about to seize control of cyberspace to "save" us from a cyber attack http://www.thenewamerican.com/usnews/item/13334-obama-closer-to-seizing-control-of-cyberspace-exec-order-imminent

According to a copy of a draft executive order on cybersecurity obtained by the Associated Press (AP), President Obama will soon order “U.S. spy agencies to share the latest intelligence about cyberthreats with companies operating electric grids, water plants, railroads and other vital industries to help protect them from electronic attacks.”

For some time, government officials have insisted that Iran is planning a cyberattack on the electronic communications infrastructure of the United States. The AP reports that Defense Secretary Leon Panetta said that the U.S. armed forces are “ready to retaliate” should Iran — or any other country — attempt an attack on U.S. cybersecurity.

Promises of the White House’s imminent issuing of the edict have been coming for months. The AP reports that regardless of the latest leak, “the White House declined to say when the president will sign the order." On September 19, Department of Homeland Security Secretary Janet Napolitano said the executive order granting the president sweeping power over the Internet is “close to completion.” (Use the link above for the entire article.)

AP report on Obama's cyber security executive order http://hosted.ap.org/dynamic/stories/U/US_CYBERSECURITY_ORDER published by UTICAOD.com excerpt - The [president's executive] order has generated stiff opposition from Republicans on Capitol Hill who view it as a unilateral move that bypasses the legislative authority held by Congress. A spokeswoman for the National Security Council, Caitlin Hayden, said the administration is consulting with members of Congress and the private sector as the order is being drafted. But she provided no information on when an order would be signed. "Given the gravity of the threats we face in cyberspace, we want to get this right in addition to getting it done swiftly," she said.

Taking over the Internet may be one way to make sure there are no October Surprises like the world was promised by Donald Trump to be released. When Trump announced that he had a surprise for release on October 24 that would affect the elections, I wondered if he was hoping for a deal. Today I wonder if we got the real information Trump threatened to release. Trump's October Surprise was allegedly an announcement that Trump would give $5m to the charity of Obama's choice if Obama will release his college transcripts and applications as well as his passport records. That is interesting, but hardly the upset one would expect. People all over the world already know these documents are on lockdown while working class Americans are forced to abdicate privacy rights. On the other hand, my ebook detailing the secret arrest and murder of my mentally, physically disabled brother, Larry Neal, and the U.S. Justice Department's refusal to release documents, records, and things related to Larry's murder after helping Memphis Shelby County Jail to hide the handicapped man's lynching might cost the Dems some votes (WRONGFUL DEATH OF LARRY NEAL http://WrongfulDeathOfLarryNeal.com ). Many people would also be offended to know that The (Johnnie) Cochran Firm is a CoIntelPro operation that is used to curtail justice for its black clients. Google "COCHRAN FIRM FRAUD." Since Larry's murder cover-up began under the Bush administration and continued throughout the Obama administration, no officials or large human/civil rights organizations have been willing/able to stand against the extreme oppression I have endured over the years to keep the lynching from being broadcast widely. Donald Trump's October Surprise is reported in a Yahoo.com article at this link
http://news.yahoo.com/blogs/ticket/trump-announcement-obama-161111445--election.html

Human and civil rights advocates must all hurry to download information that might be destroyed, or put videos of police brutality and other data the government might want destroyed in a secure cloud. Google had to face congressional hearings and was sued by numerous parties on false antitrust allegations around the time that Google refused to remove certain police brutality videos from YouTube in 2011. See my article at HubPages, "LYNCHING AMERICA" at
http://marylovesjustice.hubpages.com/hub/Lynching-America
Willie Lynch, a West Indies slave master, taught Virginia slave owners the art of slave mastery in the 1700's. "Lynching" is the term applied to his techniques; it does not refer only to killing, but to the entire process of enslaving people. Lynch advised that one main requisite to successful slave mastery is to control the slaves' communication.

No Internet reports will be allowed if/when NDAA concentration camp round-ups begin.  SOPA, PIPA, and CISPA indicated the elite have had enough of our "net freedom." Those bills meant, "SHUT UP, AMERICA." Passing NDAA meant, "Dammit, we mean it!" The Marshal Law Executive Order (National Defense Resources Preparedness Order, signed in May 2012) gives the White House control over all the nation's communication. See it at this link
http://www.whitehouse.gov/the-press-office/2012/03/16/executive-order-national-defense-resources-preparedness

THE REVOLUTION WILL NOT BE TELEVISED ~  Gil Scott-Heron

I'm Proud to be an American; at least I know I'm FREE (present company excepted)
http://youtu.be/8ZZf619DIpo


FIRST PARAGRAPH REPEATED BEFORE SIGNATURE BLOCK:  I knew something was happening! (Twenty-two(22) links are in this article.) I have experienced almost net freedom at Facebook today, and I am America's most censored person. The prez is about to seize control of cyberspace to "save" us from a cyber attack http://www.thenewamerican.com/usnews/item/13334-obama-closer-to-seizing-control-of-cyberspace-exec-order-imminent

Website WRONGFUL DEATH OF LARRY NEAL http://WrongfulDeathofLarryNeal.com  Mary Neal's Google Profile  http://www.google.com/profiles/MaryLovesJustice - Follow me at Twitter @koffietime  http://twitter.com/koffietime - Current, urgent justice issues from a laywoman's viewpoint at my primary blog http://FreeSpeakBlog.blogspot.com (the name is a joke, believe me).  See also http://MaryLovesJustice.blogspot.com and DogJusticeforMentallyIll http://DogJusticeforMentallyIll.blogspot.com JusticeGagged http://JusticeGagged.blogspot.com Davis/MacPhailTruthCommittee http://DMTruth.blogspot.com Mary Neal at HubPages http://MaryNeal.hubpages.com .Recommended articles http://topsy.com/site/freespeakblog.blogspot.com - Address:  MaryLovesJustice@gmail.com (I am censored, but some emails reach my box) Try to phone me at 678.531.0262, however, none of us really has free speech, so they may prevent your call.
Posted by MaryLovesJustice Neal at 7:52 PM