RawStory and Other Fake Liberals

1.  Did I ever tell you how few "white liberals" there really are? The folks at +Raw Story exemplify what I mean. Wikipedia says, "RawStory describes itself as progressive , bringing attention to stories that it sees as downplayed or ignored by other media outlets." Actually, it is merely a propaganda tool of the Democratic party. I wrote three comments at the RawStory article about Ms.Obama telling a college graduation class about her experiences with racism. Obviously, her experiences as a multimillionaire are different from mine. My experiences with racism expose cruelty and wickedness that few people in the 21st century can match: censorship, terrorism, denial of due process of law after racial and health discrimination that actually lead Nazi exterminations. Realizing that, I began trying to save people like my brother with serious mental illness from torture and murder, and I discovered how pervasive the problem is in the USA. This article has one(1) embedded video, three(3) photos, one of which is a screenshot proving censorship, eight(8) paragraphs and nine(9) active url links (to RawStory at Google+ and to eight other sites).

2.  "Liberals" don't want the world to know about the tortures and genocide against mentally ill Americans of every race on their watch, but the world is learning abut it anyway. This week, New York Times carried a report by Human Rights Watch (HRW) entitled, "Mentally Ill Inmates Are Routinely Physically Abused, Study Says." Not only that, HRW; they are sometimes rounded up and MURDERED like Larry Neal was, then the nation's censorship force hides the conditions under which the deaths occurred and censors, intimidates, and financially persecutes survivors to keep the murders quiet, especially black and brown victims. Google "WrongfulDeathOfLarryNeal."
http://www.nytimes.com/2015/05/12/us/mentally-ill-prison-inmates-are-routinely-physically-abused-study-says.html

3.  Whatever one would call RawStory, it cannot be called "liberal" media. Liberalism is a political philosophy or worldview founded on ideas of liberty and equality. Censoring Mary Neal to cover-up the government kidnapping and murder of her mentally disabled brother is not "liberal." It is entirely Nazi.

4.  Ms. Obama gave a masterful address to 2015 Tuskegee graduates demonstrating her understanding about racism and the need to rise above it to accomplish one's objectives. Ms. Obama has also made it known recently that she is concerned about improving conditions for people with serious mental illness. Those are two reasons why I commented at the RawStory article about people who objected to her Tuskegee speech. Surprisingly, my comments were deleted, and I was barred from further comments at RawStory. Apparently, keeping my brother's lynching that happened under the color of law a secret is the aim of the censorship I endure as well as preventing discussion about the brutality and murders of other Americans with mental illness. Censorship and intimidation intensified under the present administration. Incidents of police violence, prisoner torture and murders of African Americans and mentally ill people of all races also seem to have increased. Problems cannot be addressed without exposure.  https://www.whitehouse.gov/the-press-office/2015/05/09/remarks-first-lady-tuskegee-university-commencement-address

5.  I copied my three comments that RawStory deleted from its article about Ms.Obama complaining to college graduates about racism. The "offending" comments are in my "JusticeGagged" blog at the url immediately below this paragraph. Elitists and their propaganda media companies don't mind blacks complaining about trouble catching cabs, but genocide against mentally ill Americans must be kept out of the media. The truth is too raw for RawStory; therefore, I was blocked. In my years of being censored online, only RawStory and one news boosting service admit their censorship. They are in-your-face Nazis.
http://justicegagged.blogspot.com/2015/05/ms-obama-and-mary-neal-wont-ignore.html
(See the notice that I am banned from RawStory by clicking the picture below to enlarge it). So much for "white liberal, progressive" media. 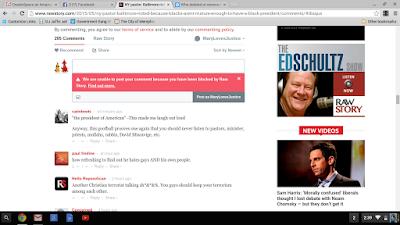 6. I prefer tobacco-chewing, backwoods racists any day to fake "liberals."

7. "No matter how hard you try, you can't stop me now" https://youtu.be/WcrZjKYHUEQ

8.  Three things cannot long be hidden: the sun, the moon, and the TRUTH. ~Buddha

Published by MaryLovesJustice Neal
Director of "Human Rights Demand" channel at Blogtalkradio
http://www.blogtalkradio.com/humanrightsdemand
AIMI vs. USA
http://AIMI-HumanRights.blogspot.com
Website: Wrongful Death of Larry Neal
http://WrongfulDeathofLarryNeal.com
Email Addresses (Hackers, you don't have to work so hard to run these email addresses together. Your partnering hackers don't let me receive emails they censor. They stop phone calls, too.)
AIMI@HumanRightsDemand.com
MaryLovesJustice@gmail.com
Phone 678.531.0262 or (571)335-1741
Poor and working class blacks, white people, and the mentally ill of all races were subjected to enforced sterilization from the 1930's to the 1970's to prevent their population growth under the American eugenics program. In the 21st century, people in these categories are being shot by police and incarcerated long-term. CNN also covers up police murders of African Americans like RawStory does. They refuse to report the secret arrest and murder of my mentally, physically disabled brother. I proved it by picketing CNN. No reporter asked me about my picket sign, because they already know what The Cochran Firm is - apparently some CoIntelPro-like law firm. The other side of my sign says "Wrongful Death of Larry Neal.com." Hackers know that I uploaded both sides on the Internet, but they apparently stole the picture with that side showing. CNN already knows about Larry's murder, too - probably lots more than I do. But to RawStory and CNN, black lives DON'T matter.
http://marylovesjustice.blogspot.com/2012/11/marylovesjustice-neal-pickets-cnn.html 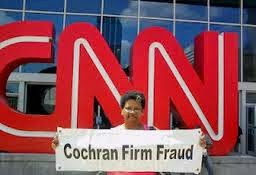 Posted by MaryLovesJustice Neal at 4:47 PM