NSA: "We laugh in the face of laws" 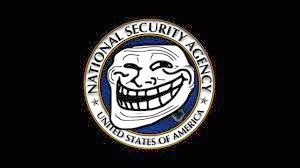 You might be interested in the 11th tweet in this series. It is from PRISM US Gov at @PRISM_NSA, which says "We laugh in the face of laws."  At tweet 10, I replied, "I know you do. Glad you decided to tell everybody."

My stalkers and I talk like that, but usually it is in private. I was very surprised they did it publicly. They seem much more overt now with their censorship, cyber stalking, and abuse. They know nobody will prosecute them for trampling my First Amendment rights to hide my handicapped brother's murder and their complicity in denying my family due process of law. They obviously have a green light to send cyber terror threatening my family. I am an advocate for the mentally ill, the most discriminated against people in America. Prison investors moonlighting as government officials want to prevent my advocacy to decriminalize mental illness and will not intervene on my behalf. So stalkers openly admit that they LAUGH IN THE FACE OF LAWS. Hurry to see it at my Twitter page, where I am @koffietime. They made 1,100 of my tweets disappear for several months after the Georgia prison labor strike, so making one tweet disappear is a small thing for criminals.

I should have known immediately the message was not from the REAL NSA, because my cyber stalkers would never be this forthcoming. They communicate by popping up messages on my screen that quickly disappear or by switching my screen to a website or photograph that conveys whatever message they want me to receive. Lately, they let me know what subjects are taboo for me to discuss by preventing me from broadcasting on Blogtalkradio when they disapprove of our program. The stalkers know what we plan to expose by reading our emails and listening to our phone calls. Recently they objected to our radio shows planned on SJSU "suicides" of African American students. They also objected to broadcasts we planned on the wrongful execution of Miriam Carey, so we were prevented from going on air those evenings.

Once the weather improves in Georgia, I will upload some more interesting films that prove my assertions, like those already at my YouTube channel jkempp703. They will not let me upload films to Youtube from my home computer. Sometimes, they follow me to see what computers I use in public venues and take control of those, also. Therefore, I may have to get another person to upload videos like I did when I uploaded "Cochran Firm Fraud 1 and 2."

2hMary Neal @koffietime
#SJSU Spokeswoman said Tiggs was school's "first suicide in a decade." What about Johnson in '08, Collier in '06? http://t.co/oVUVG03Onz JC

2hBoyce Watkins @drboycewatkins1
@koffietime - I don't ignore you, I'm just not checking twitter like that. To tell your story, you can email organize@yourblackworld.net

2haboveTHEclouds @Perserverance_
. @expedience2 @koffietime China2USA how do u keep millions of Blks controlled? USA keep em so poor they only think abt subsistence

2hLarry @expedience2
@Perserverance_ @koffietime True to a point,we have resources and know how but choose to give it to every one else but our own.Look at JayZ.

2hMary Neal @koffietime
@PRISM_NSA @thehill I know you do. Glad you decided to tell everybody.

2hMadameNoire Biz @MadameNoireBiz
Agree? RT @koffietime: If they can make blacks miss out of anything at all, they will do it. Believe that.http://t.co/Xap1Q0WWYo

2hDigital Media Dream @Digitaldreammed
Hi Mary @koffietime may The Lord be your strength as you stand on truth always. Pls children of Biafra need ur voice, killed 4 no reason

2hDigital Media Dream @Digitaldreammed
Not just America @koffietime can you ask @UN why no one was tried after 3.5 million Biafrans was murdered by nigeria & Harrod Wilson

2hVOEL @LeoSV7
@koffietime you addressing these issues is admirable, hopefully the solutions shall reveal themselves, we can give life to solutions #true

2hStering Askew Jr @Mrcooltv
@koffietime thank you for doing a post on my lil brother Steven Askew. I hope his story comes to life.

You might be interested in the 11th tweet in this series. It is from PRISM US Gov at @PRISM_NSA, which says "We laugh in the face of laws." At tweet 10, I replied, "I know you do. Glad you decided to tell everybody."

Posted by MaryLovesJustice Neal at 1:24 AM

Stalkers really hate the Word of God. This article will not respond when I enter it in my Google search engine:

"Loving a Ho on Valentine's Day"

It is in my MaryLovesJustice blog.

Happy Valentine's Day weekend to all the lovers everywhere!